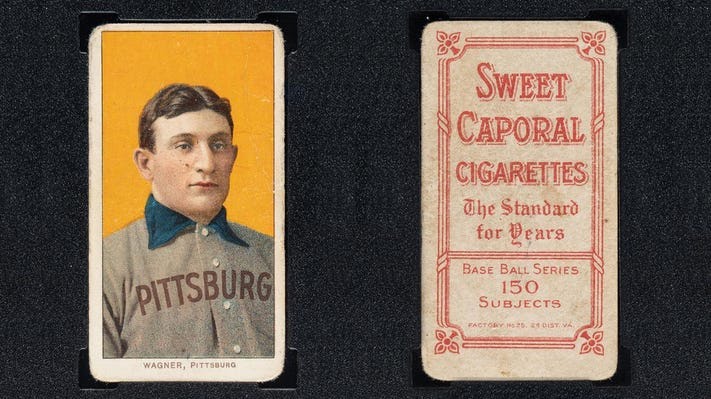 August 16, 2021 Author by raysfan1Posted in Baseball

A new record was set over the weekend for the most money ever blown on a small rectangular bit of cardboard. Someone actually coughed up $6.6M for a T206 Honus Wagner card.

Actually, I love baseball cards. I got into collecting them as a child. I thought it was neat having pictures of my favorite players. Filling in a whole set appealed to my junior OCD self. I also obsessively pored over the stats on the back. Eventually I had (and still have) every Topps baseball card from the 1970’s. College, medical school, and needing to spend my money on more important things curtailed my habit in the 1980’s. After that, a love of baseball history caused my to gravitate toward the older cards. I actually have one card from the T206 set, which was originally published in 1909 (Napoleon LaJoie).

However, although I admit to my love of trading cards, I readily admit they have zero intrinsic value. They really are, as I called them above, little rectangular bits of cardboard. Up until the early 1990’s, card collecting was a pretty simple hobby, enjoyed mostly by kids. A funny thing happened then, though—somebody decided they could be an investment opportunity. Card companies quit putting bubble gum in the packs because gum stains diminish the card value. Card companies began inserting limited series “chase cards”—rarer than the regular cards because the company limits how many are published. Market flooding and the 1994 strike popped the speculators’ balloon, and it took about 10 years for the card company profit levels to return. Unfortunately, to me, the return wasn’t the return of the kid-friendly hobby. The return was, in effect, going all in on catering to the speculators. Now there are “one of one” limited “series”—one, and only one, card published of a star player, often with an autograph and a bit of jersey or something. It is now impossible to truly fill out a complete set of cards.

in the past year a number of cards have brought in multimillion dollar auction sales. Most had been the artificially rare cards I just described. However, the king of cards has always been the T206 Honus Wagner. First, it’s over 110 years old. Second, Honus Wagner is a Hall of Famer. Third, the production was limited at the time at Wagner’s insistence. There are only 60 cards still known to exist, and most are in poor shape. Decent ones, therefore, bring big bucks. It’s always been the most expensive cards, although only insanely so over last thirty years or so. The first price guide was published in 1939, and the T206 Honus Wagner was listed as $50 (a bit over $900 in today’s money). On the rarity part, for comparison, there are more than 4000 of the Ty Cobb card.
Why are there so few Honus Wagner cards? Well, I did say he insisted the production get cut off, but why? There is a story that he disapproved of a product promoting tobacco finding its way into kids’ hands. It’s true those cards came in packs of cigarettes. Cardboard was used to keep the packs stiff/protecting the cigarettes from getting crushed in people’s pockets. There were cards with pictures of ladies and animals too, not just baseball players. Most just got thrown away with the empty pack, but some folks did collect them, a kids in particular did like them. There are problems with the “think about the children!” theory, though. First, this was over 50 ears before the surgeon general’s report on cigarettes and cancer. Most people really didn’t know how dangerous tobacco was. The harshest description of it was as a bad habit. Second, Honus Wagner did allow a cigar company to use his likeness on their cigar bands, so he wasn’t really anti-tobacco. The Pirates manager and owner both smoked cigars and thought cigarettes were low-brow, so it’s possible they influenced him to think cigarettes specifically were bad. A more likely explanation, though, is also simpler: money. Honus Wagner was one of the very first athletes to endorse products…making money off his name/image/likeness. It’s quite possible he/his lawyer made them stop the card production as he had not agreed to it/ben paid for it.