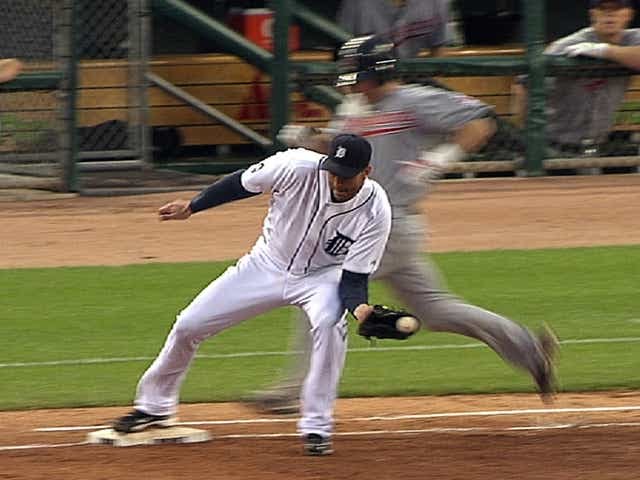 June 2, 2020 Author by raysfan1Posted in Baseball

Aug 2, 2010.  With two outs in the top of the 9th, Armando Galarraga of the Detroit Tigers is on the verge of a perfect game.  He induced the batter to ground the ball to 1B Miguel Cabrera, who tossed to Galarraga as he raced the ver to cover the bag.  Galarraga caught the ball and stepped on first half a stride ahead of the batter.  Easy call, out, game over, history for Galarraga.

Well, history for Galarraga, anyway.  One of the best umps in the game, Jim Joyce, did not hesitate in calling the batter, wrongly, safe.  No hitter gone, perfect game gone.  Galarraga quickly finished off the Cleveland Indians to preserve the win. Joyce found himself on the receiving end of a lot of profanity from Tigers fans and players, but not from Armando Galarraga.

By the time Joyce got back to the umps’ clubhouse, he’d seen a replay and knew he’d blown the call.  He graciously consented to an interview and admitted his mistake.  He apologized to Galarraga, who forgave him.  He apologized to baseball fandom, although I don’t think we were owed one—but I said he’s one of the best umps in baseball, and owning his mistakes is part of why.

Nowadays there’s the replay rule to prevent such things, but there wasn’t then.  Instead, if anything, the game is far more famous as the only perfect game in baseball history broken up by a bad call on what should have been the final out.

It was the peak of Galarraga’s career. Both he and Joyce still accept interviews about that day graciously.

4 thoughts on “Not Quite Perfect, Jim”