April 28, 2020 Author by scoutsaysweitersisabustPosted in Baseball

A few months ago, Trey Mancini made a sudden and unexplained disappearance from camp.  The team only said he was leaving for non-baseball related medical reasons.  We knew he had surgery, and messages from teammates that talked about really putting things into perspective, were ominous to say the least.  Today, Trey has decided to share the full story with the world, and it’s every bit as terrifying as anyone may have suspected.  I highly encourage everyone to read the above linked article to hear from Trey in his own words.

I have Stage III colon cancer.

I started chemotherapy on April 13.

And I am so lucky.

As you all know, I’m a huge Orioles fan, always have, and always will be.  Unfortunately the team hasn’t been very good in long time, and likely won’t be good for even longer.  One of the few bright spots has been Trey Mancini.  Something about him just resonated with me from day 1.  I have been a big proponent of his for a long time.  I had always heard rumors about how he was one of those guys who was not only a good player, but an even better person.  It’s always difficult with players to determine if you like them because of their skills, or their personality, or just who they portray themselves to be.

My sisters aren’t the only ones I have to worry about. There’s a 13-year-old kid named Mo Gaba, who’s a really big fan of Baltimore sports. He and I have gotten to be friends the last couple of years. He’s had bouts with a few different types of cancer, and he’s blind and has a tough time getting around. But he also just has the best outlook on life that I’ve ever seen. During that tough year in 2018, I stayed back in Baltimore for the All-Star break so I could spend a day with him and his mom — took them to Dave & Buster’s to hang out and just have like a normal day.

Well, in March when I was in the hospital, Mo actually called me to see how I was doing. He told me that he was worried about me and wanted to make sure I was O.K.

The 13-year-old kid with cancer calling me to make sure I’m O.K.? It blew me away.

I couldn’t begin to imagine what it would be like to go through something so horribly scary as stage 3 colon cancer.  To know you are facing chemo treatments every t 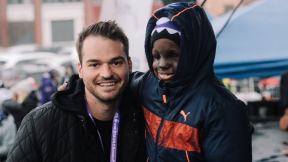 wo weeks for the next 6 months.  To not know when or if you will be able to return to the job you love so dearly.  To have your entire world turned upside down.  And to somehow to handle is all so well, keeping things into perspective among all the COVID madness that is going on in the world is just astounding to me.

I’m getting chemo at a hospital in Baltimore, and I have to drive up there alone. Nobody is allowed to come in with me, and that’s completely fine by me. I don’t want anybody else being put at risk — people that are close to me and that I love, and other people in the hospital. You just never know. COVID-19 has spread so quickly. I’m definitely trying to follow all the protocols, not only because it’s the right thing to do, but also because I don’t want to expose myself to anything, especially before going into chemotherapy.

We are all keeping you in our thoughts Trey.  We are all still rooting for you as we have in the past.  Only now we are rooting for different things.  Get well soon and thank you for being an inspiration to so many.