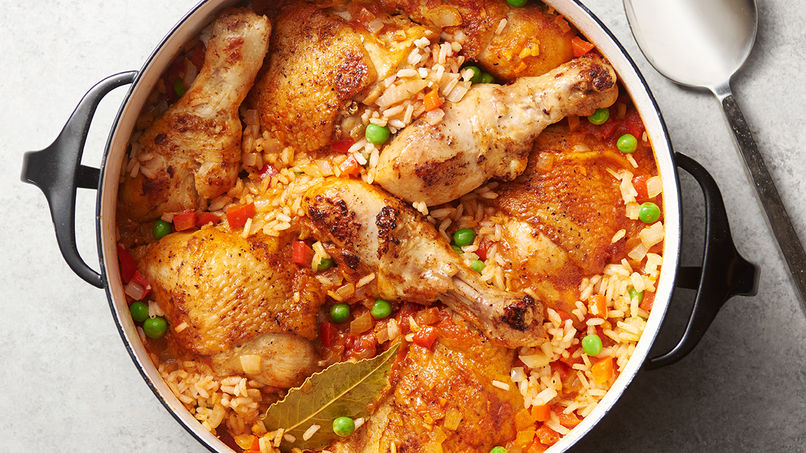 Feesh backup catcher Francisco Cervelli is Venezuelan with Italian grandparents, and he was taught to cook, well, at an early age. He’s been spending quarantine with his Macondo extended family by offering a video cooking class every week or so on the Feesh MLB homepage called “Behind the Plate.”

His most recent offering was the Latin classic arroz con pollo (rice with chicken), which you could also call chicken paella. It looked too good not to try to make, but of course I had to add a few twists of my own. If you want the pristine version, you can dig it up on the Feesh web site. All I can tell you is, this recipe, as given, will feed six to eight people. The four of us here destroyed it within a half hour, leaving nothing for the dogs.

2-3 tbsp olive oil
1 cup each diced onions, carrots and green or red peppers (preferably with the skin seared off and gills including seeds removed)
1/4 cup each chopped olives and capers
3-4 garlic cloves
1/2 cup paprika (or smoked paprika)
a few dashes of crushed red pepper or cayenne (optional, if you like a little kick)

2 cups uncooked rice (white, saffron yellow or Vigo roasted chicken rice will do)
5 cups liquid (your mix of water, chicken stock, chicken broth or any combo of all three adding up to five)

Heat the olive oil in a large pot and add the chicken, stirring until browned. Don’t overcook it at this stage. When t is lightly browned, remove it from the pot and put in a bowl. There should be some oil and liquid from the chicken left. Add a little more olive oil if you like.

Cook the onion, carrots and green peppers in the same pot, same oil. Add the crushed garlic cloves. Cook for about ten minutes. Then add the capers and olives, stir, and cook for another five minutes or so. At this stage add the crushed red pepper or cayenne, or both.

Add the two cups of rice and stir, browning the rice slightly, about five minutes. Add the five cups of liquid and the paprika. Stir. Bring to a low boil and add the chicken back, stir and cover.

Cook at low to medium heat, a low even boil, for about 30 minutes or until all the liquid has been absorbed. Stir in the chopped cilantro.

If you like that scrumptious crust of browned rice to form at the bottom, raise the heat and cook for five more minutes. That should do it.

Remove from heat and let stand, covered, 15-20 minutes for the flavors to shake hands.

Next up: essentially the same dish but with seafood. paella con mariscos.