The Feesh are orf tonight before opening a first half closing series with the unexpected Feelies, who will be bringing their fans and their horrible horsemeat and Velveeta™ sandwiches to Macondo Banana Massacre Field. Tonight, though, I’m free to let my imagination drift, untethered by disinterest, to a subject which is always in the back of my thoughts: the Phillip Island (Victoria, Australia) Penguin Parade.

When you think about it, orf-nights and penguins were really made for each other. The little penguins (which used to be called “fairy penguins” until the term became politically incorrect) are the smallest of the sphenisciform beings the Old Ones, in their hilarity, bestowed upon the Earth in the time before time when one was for all and all was for one. They apparently did try to create a more respectable sized example in the emperor penguin, but decided, finally, not to spoil a good joke and moved them to Antarctica and placed them in the care of the shoggoths. Tikili-li!

Anyway, they left these hopelessly bureaucratized little birdlings upon the shore of Philip Island, barely an hour’s drive from the ruins of the Gippsland Giant Worm Museum (no kidding; here’s a photo of it, sinking back into the earth and covered with graffiti):

That is correct. It is an entire building shaped like a giant Gippsland earthworm, complete with a gift shop the once sold ten different flavors and sizes of gummy worms. But what of that? You drive past it and in an hour you are crossing the bridge to Phillip Island and following signs to the Little Penguin Museum and arena: 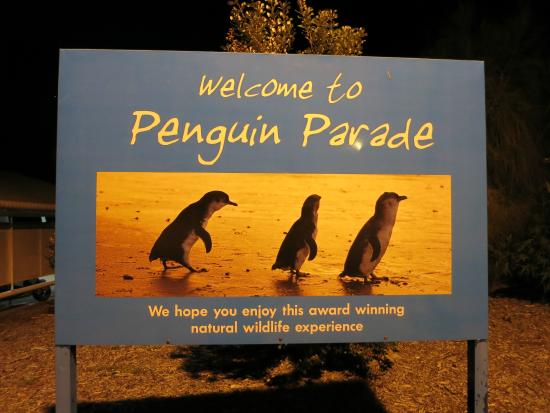 So what’s this all about, you ask? Well, first of all, remember it’s an alternative to thinking about the Feesh (upon which little penguins feed, get it?). Mainly, though, it’s an even more unique sports environment than She Stadium in the first year of the Mutts. The little penguins – many hundreds of them – live in a maze of burrows in the seaside dunes just beyond the museum. Every morning, they file out with practically military academy precision and follow their leaders down to the water into which they disappear for the rest of the day, filling their bellies with piscids (and filling the bellies of sharks and sea lions with themselves. Sea lions, in fact, have a way of “peeling” captured penguins with their tongue and teeth, spitting out the skin with its tickling feathers and swallowing the rest. Sharks, having table manners only slightly more refined than Donald Trump’s, just gulp them whole).

But now comes the good part: as the sun sets, the penguins return to the very same beach where their burrows are. To provide a comfortable, family-friendly environment for tourists to observe the return and root for the penguins, the bureaucrats of Victoria have overseen the construction of the Phillips Island Penguin Parade stadium. Gradually, over the last half hour or so, the parking lot has been filling with tourist buses from Melbourne, filled with groups of Japanese and Chinese tourists carrying expensive cameras and cellphones significantly more advanced than ours. The museum lights dim and come back up, ushering you to the boardwalk leading down to the arena. Really. here it is: 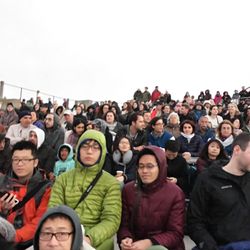 As the sun goes down the stadium lights come up slowly, illuminating the shoreline. A wave ripples ashore and when it recedes there is a penguin standing there, as if it had just materialized out of air, water and sand. Another ripple, three or four more penguins. And another – ten or fifteen more. And so on. Soon there are hundreds of little penguins on the shore and they immediately begin to form up ranks, like so: 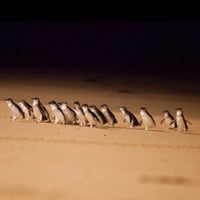 Whereupon they toddle, still in perfect formation, rank after rank, back to their burrows and tuck in for the night.

Rank after rank of the little birds make their way up the slope, keeping formation, until the last penguin evacuates the beach. The lights slowly come up. You can hear a collective exhalation, like the air being let out of some gigantic inflatable horseshoe shaped airplane neck pillow.

Then the spectacle you really came for unfolds. The leaders of each Japanese or Chinese tour group telescopes a small aluminum wand sporting a colored pennant emblazoned with the name of each tour company. And then – have you already guessed this? – the Japanese and Chinese tourists form up disciplined ranks behind each appropriate guide and file, with perfect military precision, out of the arena and back to their tour buses.

Now if you’re a Yank – even one with a British wife – you’ve probably made the trip alone and all this regimentation may seem a little dizzying. Anyway, it’s time for the two and a half hour drive back to your luxurious room at the Como Inn on Toorak Road in the lovely Victorian city of Melbourne.  here, in the prime of your life, you have crossed orf what would have been the number one item on your bucket list had you left it for your obsolescence. In the morning, you’re free to think about your wretched excuse for a baseball team again.

Coda: What? Why yes, of course there’s a gift shop at the little penguin museum. Here it is:

8 thoughts on “No Thanks, I Already Have a Penguin”