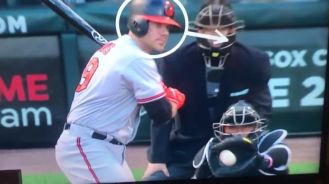 Chris Davis, the Baltimore Oriole First-Baseman who is currently making 17 million a year, and as many of you may have heard is currently having the worst season of any player in the history of professional baseball ever. Davis is signed through 2022 on a 161 million dollar contract and is now officially benched indefinitely as he’s the current third string first baseman on the worst team in baseball.  Take a moment to let that sink in.  The Orioles have officially called up Corban Joseph, brother of Orioles’ catcher and fan favorite Caleb Joseph from Double A Bowie to take over for Davis.

Here’s a Chris Davis highlight reel for your viewing pleasure.