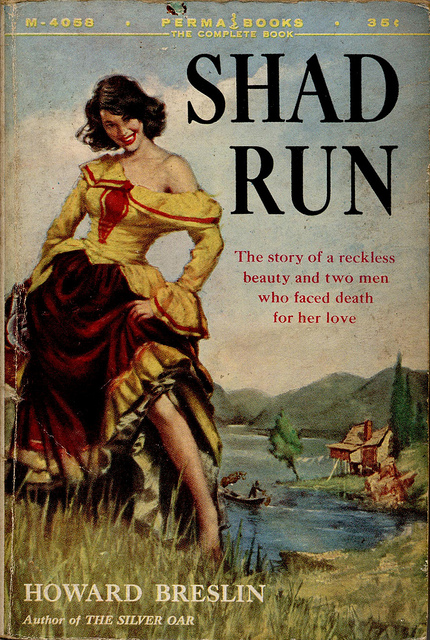 Early yesterday evening, while I would have been ignoring the Feesh if they hadn’t had a travel day en route to the land of horrible horsemeat and Velveeta™ sandwiches,  I got my annual phone call from my favorite local seafood restaurant letting me know they had received a few portions of shad roe and did I want one? Needless to say I was there at 7PM ready to dine.

The springtime shad run in the northeast is a lot like the sunset side salmon run, but mostly without the bears. Shad isn’t a glamour feesh. It isn’t larded with Omega3 oil. Its flesh, though delicious, is honky white instead of sexy pink and riven with little bones. Also unlike running salmon, running shad will eagerly take your hook and the annual run attracts scores of anglers who couldn’t catch brook trout any more than Polyphemus could square up an 88-MPH curveball. See them lining the shores of eastern rivers like hairs on the back of an apoplectic cur, casting whatever lures they haven’t already lost to snags at these indiscriminate nautical migrants from tidewater up to the first cataracts (shad, like most white feesh, can’t jump).

The old cooking style for this hapless and not especially exciting feesh – they don’t put up a fight; you drag them out of the water like protesters from the nineteen sixties – was to “plank” them. Planking consisted of cleaning and butterflying them, then crucifying them, as it were, on moistened cedar planks and roasting them over a covered wood fire. Then you could spend the rest of the day picking the bones out of their succulent flesh. I have photos of wooden panels stretching for hundreds of yards along the Hudson underneath the newly built Tappan Zee Bridge (which is now being dismantled) where local fisherman reserved space to tack their shad during the runs.

However, what these anglers are really after isn’t the pliant toothsome meat. They’re hoping to bag a few big gravid females who will yield up the true treasure of the Hudson, the Connecticut, the Delaware and such other northeast coast waterways: their two fat sacks of roe. Other locals would stroll by those windrows of crucified shad and purchase a few sacs from the pails of chilled brine where the fishermen stored them to take home and roast. There’s a vivid account of the shad run and the local response to it in the pioneering feature journalist Joseph Mitchell’s venerable book about the New York of the 1920s and 30s, Up in the Old Hotel. (Be warned: if you read this book you’re also going to find out the best oysters in American once came from the Kill Van Kull between Staten Island and New Jersey, water in which you could now effortlessly dissolve a spoon.)

Shad roe is a delicacy, and it takes a trained palate truly to appreciate it. Properly sauteed in good Italian or French butter with a bit of garlic, onion, salt and coarse ground black pepper, and wrapped with nitrate-free bacon, this subtly flavored delight comes to life on your patrician taste buds. It should be well browned and gently crisped on the outside. It should not be too well done to clump it and compromise its slightly granular texture. Shad roe has the kind of flavor one might associate with sweetbreads, a flavor you can delight in probing and contemplating as you dine. A glass of very cold, dry white wine – I like Retsina for this feesh deesh myself, since its sonatas of pine resin invoke the woodlands along the once pristine rivers where the feesh is taken and helps emphasize the flavors of the roe.  And it doesn’t hurt to have Dionysos as your table companion. In any event it sure beats eating out with your accountant.

After savoring this wonderful, once-a-year dinner thoroughly I came home to watch the Iron Giant, Judge Holden and Gary Sanchez launch the sort of dinger barrage I think we can expect from this Borg team all season. Oh why did this have to be designatedhitterball?

One thought on “Stimulate your taste Buds with Shad Roe”