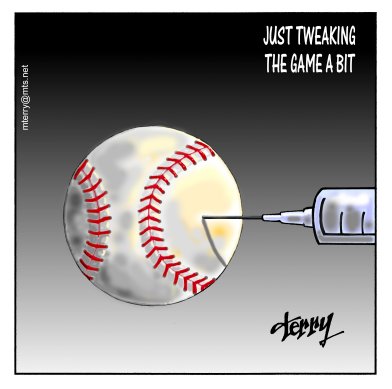 March 2, 2018 Author by happytwinsfanPosted in Baseball

Yeah they juiced the ball

Over at fivethirtyeight the nerds have a write up summarizing the research done by several universities who compared some pre ball go far surge balls to some post ones. They started by putting the damn things under a CT scan to check out core densities or something. Then they cut the things open and subjected the poor things to something called thermogravimetric analysis (TGA) which in their unkind words “essentially cooks a material to see which parts parts of it vaporize at which temperatures. Using that information, researchers can create a molecular profile of a given material.”

Next some stat head and physics nerd takes the likely input of how much lighter and aerodynamic the new balls are and somehow interprets that through a bunch of stat cast spreadsheets involving exit velocities, launch angles etc. that only his mother could love, to calculate how many more ding dongers should be expected to result from the properties of the new balls, as opposed to more and more hitters figuring that singles hitters drive Chevys but home run hitters drive Cadillacs, and the ongoing acquisition of athletic super hero powers by MLB players.

The final conclusion was that changes made to the ball since 2014 should be expected to lead to about a 25% increase in homers. The actual increase since 2014 is 46%. A juicer ball and the Incredible Hulk DH’ing. Seems to add up.

We X-Rayed Some MLB Baseballs. Here’s What We Found.

When asked, what about this Jack, MLB momentarily paused its very necessary efforts to keep its trust fund puke employers who ain’t never gonna get nothing that they don’t pay for well supplied with Vaseline, to note that they “had commissioned a group of scientists and statisticians to investigate any changes to the ball, and that the committee would issue a report on its research soon. According to Alan Nathan, one of the physicists on the commission, the task force found that all the characteristics that MLB regularly measures, including the weight, circumference, seam height and bounciness of the ball, were within ranges that meant variations in the baseballs were unlikely to significantly affect home run rates. MLB declined to provide the data supporting these assertions.”

Tim Tebow is trying his heart out. MLB please don’t humiliate him any further because you sniff a little money and he don’t know no better

Shohei Ohtani struck out 8 of the 12 hitters he faced in his most recent outing. They’re saying that he had good command of his secondary pitches and that his fastball touched the upper 90’s.

Welcome to the bigs Shohei.

8 thoughts on “Bits and Pieces X”