As a baseball fan, 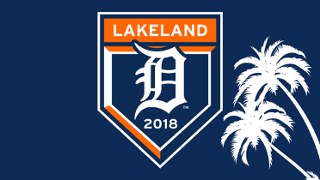 you are so eager for the new season that you can’t help but feel elation that Spring Training is upon us. Pitchers and catchers reported this week, and it’s a long-awaited valentine for having survived the off-season.

As a Tigers fan, though, it’s a bittersweet beginning. Obviously, we are looking forward to a loser season, and it’s difficult to get hyped about it. Only the daily routine of baseball will bring comfort and contentment — a lesser but satisfying replacement for joy.

And, just as you’re about to soar happily again into the baseball ether, Twitter provides a gut-punch, reminding you of what you’ve lost:

Tigers pitchers and catchers have reported to spring training but I still haven’t seen Justin Verlander. Will ask.

Oh, my god! You thought you moved on from your ex, but then you see him with another team and your heart breaks all over again. The collective responses of Tigers fans were predictable:

That number should never be worn by a Tiger again. Unless you come back to end your career? #ComebacktotheD2020

And, it wasn’t just the fans spouting their grief on the platform.

Thankfully, the heir apparent stepped in to amuse, distract, and help us move on.

I may or may not have asked for a number change….. 🤔🤔 https://t.co/PeUOw7OfQv

Maybe our hearts will heal and our new star will give us something to look forward to this season after all. Maybe there is hope and we aren’t far from a return to better times…

But, you have to get there, and between here and another pennant run is this:

Asked Derek Norris about what he’d tell those that are upset the Tigers would sign someone with a domestic violence suspension. His response: “People are entitled to their opinions… whatever doesn’t kill you make you stronger.”

What didn’t kill HER made her stronger???!!!

Or, the domestic violence suspension didn’t kill HIM and that makes him stronger?????!!!!

My, how far from Evan Reed we have drifted. No way Mr. I would’ve tolerated that. As soon as the public outcry started, Norris would’ve had to “clarify” his comments and assure us that he does not take the matter lightly and is looking to grow as a person with the team. But, Mr. I is gone, and this is the turd nugget Al Avila invited to ST.

In case you thought the money quote that’s getting so much attention was taken out of context or isn’t representative of his larger presser, peruse the following additional excerpts:

Reporter: “I know you talked about turning the page but are there some things maybe you learned about yourself through all of this that will really stick with you?”

Norris: “You learn new things every day, you name it. I learned something new today just getting out there so I think you learn stuff through the ups and downs in life, baseball and everything and it’s made me strong.”

Reporter: “There will inevitably be certain people who are uncomfortable with the Tigers signing you just because of the suspension. What would you tell those people?”

Norris: “That I plan on working hard and playing good baseball for this club. People are allowed to their opinions. They’re allowed to their opinions regardless of anything so it’s part of what you have to deal with and what doesn’t kill you makes you stronger so I’m just going to go out there and do what I love doing and that’s playing baseball.”

That’s right, if you have a hard time having a guy suspended for DV on the team, well, you’re allowed your opinion.

It’s like he doesn’t get that having fans is what allows the team to exist. Dude, you should be trying desperately to win fans over and contribute to the Tigers brand. Norris signed a minor league contract and is hoping to make the team. He’s not too bright if he doesn’t get that he needs to be doing everything he can on and off the field to stick around. Alienating fans is not the best way to go about that.

I was so glad to be shed of Frankie, and now Avila has brought in…this.

It’s going to be the worst of times, y’all.

7 thoughts on “Detroit Has Gone South”