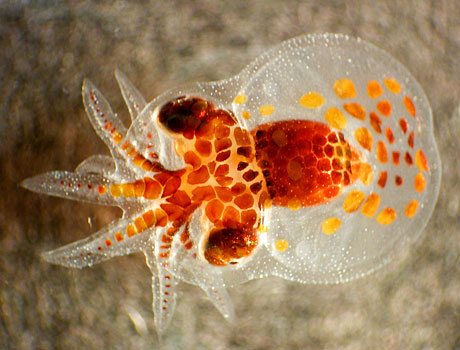 There’s a sea dragon (or Sargasso seahorse), a multi-armed thing which I think is a sea louse, a stone crab (foreground) and a shark. I have no idea what that Teddy bear on your far right is doing there. Maybe it can’t tell a shark from a salmon. In any case, they are nevermore to race up the right field dirtway to the surprise and delight of the few kids at Macondo Banana Massacre Field. Score another one for utter joylessness under the carpetbagging regime of Sherman and Jeter.

Why did the team discontinue this wondrous tradition? Mike Hill must have found out they all had cancer.

However, the Feesh did announce that they will shortly unveil the larvae, elvers and fingerlings of the same species they have discontinued. That way, the marine organisms race will be equivalent to the Double- and Triple-A team they plan to field for the regular games.