I’m giving Scout the day off and recapping the Cubs/Nationals Game Five Extravaganza. It’s 12:55 am EST, I’m exhausted and emotional, so this might bounce around a lot.

This was a game that put viewers on a roller coaster of emotions from inning one. We have the Nats, at home and desperate for a division playoff series win. We have the Cubs, who even though they are defending World Series champions, are also champions at choking in huge playoff games. Who is going to choke more, we asked ourselves?

The answer – can you say both? Because it was a little bit of both.

Kyle Hendricks, who was so excellent just a few nights ago, looked like the Aldi’s brand of Kyle Hendricks instead. It was awful. For a minute, it looked like it was going to be the Nats’ night. But then momentum absolutely reversed course.

Let’s talk about the two eyed elephant in the room – yes, that was Max Scherzer who came in for relief and subsequently crapped the bed. Like I told a friend of mine, he forgot how to Scherz. But then again, the Cubs were up by a good amount and suddenly decided to forget how to field. I mean, this was pure insanity in every way.

After that, it was just all sorts of crazy things that made no sense, that made fans of both teams pop Tums and curse loudly.

The Nationals had their own “Infield Fly Rule Game” moment, with Jose Lobaton being called out on an overturned call. Now, I thought he was out, too, but that’s (pardon me) a shitty way to get called out.

I mean, there was awful play, messy play, all over this game. Matt Weiters was like a dying dog out there. Each team trotted out almost every pitcher who still had an arm attached. This was just amazing. 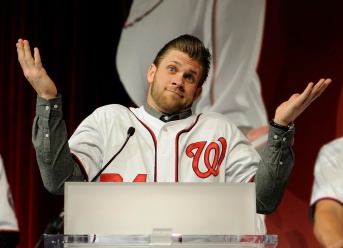 It all ended up with Bryce Harper as the last batter on the last out, bottom of the ninth. Their golden boy could not connect off a clearly gassed, but warrior hearted Wade Davis, and the Cubs gut out a victory. Once again, a team that is clearly better than probably 3/4 of the league in every way does not make it to the championship division. If I wasn’t a bitter, heartless woman whose favorite team’s most hated rival are the Nats, I’d feel sorry for them.

An impossibly long nine inning game and I have the ulcer to show for it.

How you feelin', @ARizzo44! #CLINCHED pic.twitter.com/n7lk21dnx8

11 thoughts on “The Crazy Train is Actually the Washington Metro.”