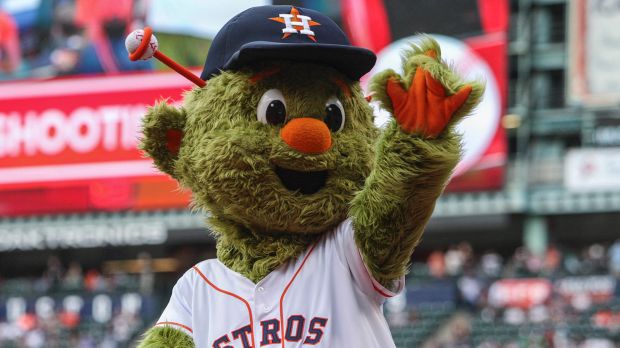 October 3, 2017 Author by professormaddog31Posted in Baseball

Let’s face it, most of us aren’t going to have a team to root for. Most baseball blogs are going to tell you the pros and cons of why you should choose one team over another, but here at Fan Interference, we know the most important reason why you choose a team that’s not yours, and that’s MASCOT AWESOMENESS.

What makes a mascot awesome? A host of things add to mascot likeability – furriness, sassiness, the lack of an opponents’ mascot. Let’s go head to head with the teams that are left and see what mascot goodness they have to offer, and make our choices from there.

Next, we have the Diamondbacks and the Colorado Rockies. Arizona has D. Baxter the Bobcat, the Rox have Dinger, the purple dinosaur. Frankly, both are terrible mascots in the scheme of things. Dinger is cute, but doesn’t do anything memorable. Baxter is engaging and a lot of fun, great with children and folks with disabilities, but might actually be one of the most frightening characters in all of professional sports. The edge here goes to Baxter for having a huge heart for people underneath that fur suit. Also, for actually having a Twitter account. Dinger, step your game up. You really are a dinosaur.

The Cubs have a young upstart in the mascot department, one Clark the Cub. The Nationals have Screech, a bald eagle that you rarely actually see. Clark loves kids and has freckles, and has fun with the fans. Screech doesn’t do diddly squat and shares his name with the most annoying member of the Saved by the Bell squad, PLUS looks like a sad relative of Freddie Falcon, an NFL mascot. Advantage – Clark.

Red Sox vs Astros…. HAHAHAHAHAHA Oh, there’s no comparison here, folks. I might as well say, “Who ya got, Greg Maddux vs Rick Ankiel when he was still a pitcher?” Wally the Green Monster might be a very fine mascot – and he is, truly – but there are few finer character ambassadors than Orbit. That fuzzy green dude wins every time.

Then we have our two bye teams – the Los Angeles Mascotless Dodgers, and the Magical Land of Cleve Sliders. As with the Yankees, the Dodgers are automatically eliminated by virtue of having no mascot. The Land of Cleve is an interesting quandary – go with the actual mascot that roams the stands and has a twitter account, which is the purplish fuzzy wuzz named Slider? Or the mascot that is affixed to their hats and unis, the horrible Wahoo? Either way, it’s a bad look. Wahoo is terrible and if that’s the mascot you choose you might as well go characterless like New York and LA do. If you choose Slider, he looks like a walking moldy Froot Loop and no one likes that. By default, it’s the Magical Land of Cleve because they actually have a character. But I’m side-eyeing the hell out of y’all.

So, there you go. Going into the next round are Clark, Slider, Orbit, Baxter, and TC Bear. The choice is yours. All of these mascots have lovable sides, plenty of fur, and lots of fun. We are all winners when we choose a mascot to cheer on!

10 thoughts on “Bandwagoning? Choose Your Playoff Team The Mascot Way.”