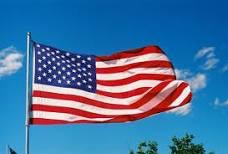 Scouts: Before we get started I just wanted to take a moment to extend thoughts and prayers for the victims and their families of the mass shooting late last night in Las Vegas.  Such a terrible tragedy.  I know that Prof would extend her sorrow over the incident aswell, as her part of this column was written well before the shooting took place.  I wish there was something that could be said about such a senseless act, something that could make others feel better, but ultimately words are without meaning when such a despicable act is carried out.  There is no meaning to be found in such an act, no reason other than hate, anger, and sadness.

Prof: Well, folks, this is pretty much it. The last hurrah for most teams for the year. We look back, look to the future, and look forward to the playoffs! But for now, let’s see how a lot of our favorite teams ended this season. Feeling a bit nostalgic, so we’re going way back with some good old Walker Brothers tunes.

Pirates 11, Nationals 8 – Prof: Well, this isn’t what Washington was hoping to see heading into the playoffs. Not only does Max Scherzer, who quite possibly is your NL Cy Young winner this season, have something hinky with his hamstring, but Gio Gonzalez had a terrible outing, allowing five runs in the first inning alone. The offense tried their hardest to catch up – Anthony Rendon and Michael A. Taylor both hit home runs, Rendon’s being a three-run bomb. But it was too little, too late, and the Pirates were able to hold their heads high in their final game of the season. (Also, John Jaso is probably going to retire, too. Just saw it on Twitter while writing this.)

Astros 4, Red Sox 3 – Scouts: A four run rally in the 7th swayed the game for Houston, a game that’s just a sample of what to expect when the two teams meet for real on Thursday in the ALDS.  Jose Altuve finished the season with a career best .346 average which was good enough for his third AL batting title.

Mets 0, Phillies 11 – Prof: LOLOL Mets. Big news over the weekend when it was announced that both managers of these teams are losing their jobs. Not quite sure where it went wrong with Pete Mackanin, but Terry Collins is officially stepping down from the manager’s role to “accept” a “front office” role. Which, I can only assume, would be creating new and novel ways of screwing over Michael Conforto. Anyway, New York can’t even finish out the year right, losing in ridiculous fashion to Philadelphia. An inside the park home run capped the stupidity.

Blue Jays 2, Yankees 1 – Scouts: Jose Bautista finished his Blue Jay career with a sac fly and Ryan Goins picked up the go-ahead single in the 8th as the Yankees rested pretty much their entire team in preparation for the post-season.

Padres 4, Giants 5 – Prof: Saturday was an emotional day at AT&T Park, as lifelong Giant Matt Cain said his final goodbyes with a good performance and hugs all around, even one from my mortal enemy MadBum, which actually made me tear up a little. That’s how much I love baseball, y’all – that this guy I truly can’t stand made me cry. Anyway, on Sunday the Giants might have said goodbye to another pitcher, it all depends on how the offseason pans out. Johnny Cueto (much like his brother-in-arms) started the game but did not get the win. That belonged to Hunter Strickland. The Panda, Pablo Sandoval, hit a solo homer to break the tie and get the last win of the season for a really awful San Francisco team, one that ended just a couple of games away from 100 losses.

Mariners 2, Angels 6 – Scouts: LA picked up a big 6 run 7th inning including a three-run homer by Eric Young Jr.  Rookie Parker Bridwell who the Orioles gave away for a bag of popcorn threw 7 shutout innings to finish the season 10-3 with a 3.64 ERA and 1.20 WHIP.

Orioles 0, Rays 6 – Scouts: Why go out with a bang when you can go out with a whimper.  The O’s offense managed just three sad little hits as Blake Snell carried a perfect game into the 5th.

Brewers 6, Cardinals 1 – Prof: The Brewers juuuust missed the playoffs, so they decided to go out in style against the dreaded Cardinals. I wonder, if Milwaukee hadn’t crapped the bed against Cincinnati during that series when the Reds swept them, would history have been written differently? That’s why you play 162 games, and as we’re fond of saying around here, baseball is a game designed to break your heart. The Brew Crew have to be happy about their team going into next season – they have a solid group right now, a lot of heart, and a rotation that once they are healthy (looking at you, Jimmy Nelson!) will be very good.

Reds 3, Cubs 1 – Prof: Joe Maddon decided to coast into the playoffs, giving Anthony Rizzo and Kris Bryant just the slightest bit of play, allowing John Lackey to pitch only one inning, and basically letting the bench boys take the field against the Reds. Joey Votto and Adam Duvall both went 2-4, but Duvall had the better day, with an RBI double for his efforts.

Braves 8, Marlins 5 – Prof: Bless him, the Iron Giant tried, but he couldn’t get to 60 home runs. 59, though, is still an incredible, ridiculous number, one that he and all the Feesh Faithful can be very proud of. And they were, as Marlins fans gave their star a standing ovation. Well deserved if you ask me. For Braves fans, it was nice to see some of our youngest players step up big. Ozzie Albies and Lane Adams did well, and Dansby Swanson (he of the incredible hair and fancy pants name) made up for a terrible error that allowed some wildness in the 5th inning and a Yelich run by hitting an RBI single in the seventh inning.

Dodgers 6, Rockies 3 – Scouts: The game meant very little to both teams who were mostly just trying to stay away from key injuries.  As a result, well, here take a look. 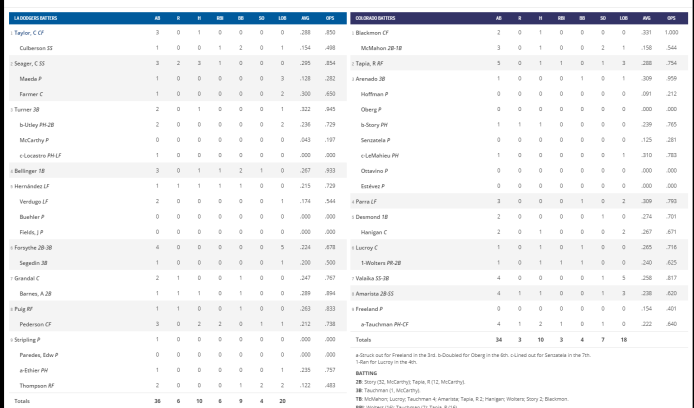 That’s um.  Quite a few moves and substitutions there.

White Sox 1, Indians 3 – Prof: The Magical Land of Cleve was indeed magical again, ending the regular season with 102 wins, the most in the AL. Something I learned today – Chris Volstad is still in the majors? I had no idea.

Diamondbacks 14, Royals 2 – Prof: I’m all emotional about baseball lately. This is what happens at the end of the regular season. It hits hard. Another thing that made me tear up was that the Royals core four are probably headed to different teams this offseason. The Kansas City fans know this, too, and said their farewells when they were pulled from the game. Cain, Hosmer, Escobar, and Moustakas all tipped their caps to their devoted and loving fans, and it was really touching. After the fifth inning, it was all Gritty Snakes, all the time. And other than a Jeremy Hazelbaker homer, it was all thanks to small ball. What a mess. They are sitting pretty going into the playoffs.

Tigers 1, Twins 5 – Prof: More Prof tears as Glen Perkins (who I actually REALLY DO like) is hanging it up. Saturday was his last appearance on a mound. He asked for and got the game ball and then cried like a baby in the dugout. That breaks my heart. He was so good when he was healthy, but lately the trick has been keeping him healthy. I’m gonna miss Perk, he was a good dude in every sense of the word. Anyway, about this game – big Bart C. doesn’t want to be left off the playoff roster and made his case with this one-run outing against Detroit, who were fresh off a Lettuce Event.