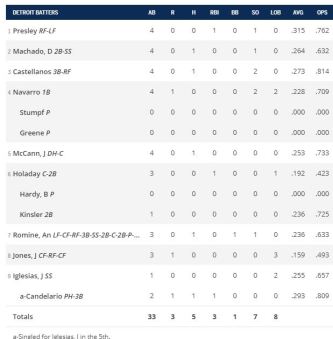 Check out that OPS.

There’s a chance today’s game between the Tigers and the Twins gets rained out. If not, it will be a superlative has-been match-up between Aníbal Sánchez and Bartolo Colón for a Duel of the Démodés.  On account of the forecast, Beautiful Brad Ausmus elected to play Andrew Romine at all nine positions last night — instead of waiting for today —  to fulfill Romine’s leaf-long wish to head around all the positions in a single game and assure his place in Baseball History. Thusly, Lettuce became the 5th player in MLB history to act as a 1-man all nine (Can we call them “Niners”?).

Our man began the night in the outfield and then started through the infield from the third base side. It might have been amusing to see a straight 9-8-7-6-5-4-3-2-1 (or the reverse) combo, but that would have been a nightmare in staffing the other spots. So, Brad went with 9-8-7-5-6-4  before breaking the pattern with a move to catcher. If you watched the Tigers feed of the game, you were treated to plenty of crotch-shots to demonstrate that Romine was actually “calling” pitches. (Thanks?) He let a ball (or two) get past him, but he’d make up for the official passed ball on his record by getting his first hold when he took the mound in the next inning. (Awww) After “inducing” a ground out from Miguel Sanó, he finished at first base, where he fittingly recorded the last out of the night. Lettuce made history and the Tigers got the W. (And I’ve been more afraid when Frankie took the mound with a one-run lead.)

Hey, girl, I can play all your positions.

The whole thing was a gimmick, sure — as were the previous such incidents — but it did get people watching a pointless Tigers game that featured zero stars (no Miggy, no Kinsler, no anybody who regularly makes highlight reels), which was the point. The Twins had clinched a playoff spot already, so it didn’t matter much for them either. And, today, we are all talking about a balding bench player with a lifetime .240 average, which means either Brad is a real player’s manager with a big heart or the team was making up to Lettuce after Miggy punched his brother in a game a few weeks back.

Either way, the pressure is on the Twins to step up their gimmick game now. Today, will Paul Molitor scrap his DH and let Colón bat? Will he let him step to the plate in what could be his final game? Doubtful, but even if he does, he still won’t be one of the elite Niners. You’re in the books, Lettuce — in the books. /hat tip 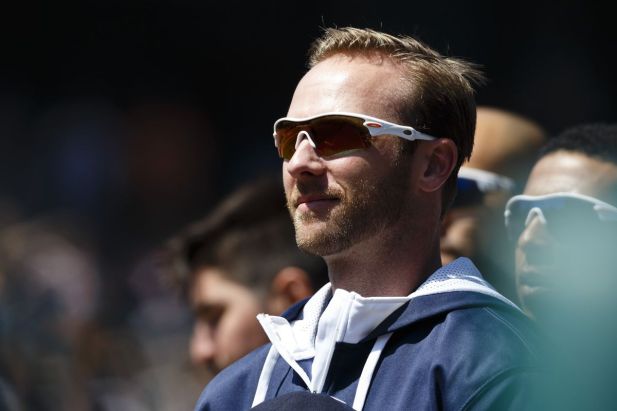