August 21, 2017 Author by professormaddog31Posted in Baseball

Coming on the news that young pitcher Steven Matz needs elbow surgery and has been suffering with nerve damage all season, I think it’s a really great time to ask a serious question.

What the hell is going on in New York? 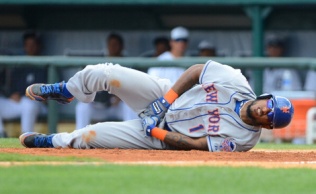 It’s become a joke in many circles now; the Mets say that there’s nothing wrong with a player, less than 24 hours later same player goes on the 30 day DL or has to have season ending surgery. It’s ridiculous. It’s almost criminal. The medical staff might actually be crippling their own players, and ownership doesn’t seem to care.

In the last few seasons, we’ve seen virtually the entire rotation go down at least once, and for some guys multiple times. We’ve also seen other players struck down (think Curtis Granderson and his hip), and let’s not get started on the sad David Wright saga.

I don’t know why the Mets are suddenly falling apart, but they are, and something desperately needs to be done about it. The training staff constantly brush injuries off, or underplay them. As I mentioned before, they (along with manager Terry Collins) will say, “Oh, Joe Schmoe is fine, he’s not injured. He just had a bad day.” The next day, you’ll hear on MLB radio or see on your Twitter timeline that Joe Schmoe has bone chips and/or a torn ACL and will be out all season. It’s ridiculous!

Ron Darling, former Mets great and current broadcaster, went hard on the training staff earlier this year and it was glorious.

How many more young ballplayers have to sacrificed to the altar of stupidity before there is wholesale change at Citi Field?