Note: Kennington Oval, or simply “The Oval,” is a venerable cricket ground in Lambeth on the south bank of the Thames in London.  It was originally built in 1845 as the home of the Surrey Cricket Club and has been the site of legendary regional, national and international test matches too numerous to mention. Not long ago the board of the club succumbed to the nauseating practice of renaming the ground in a corporate sponsorship. You can go look up the current name if you want. I will not mention it here. Let me first set the scene: 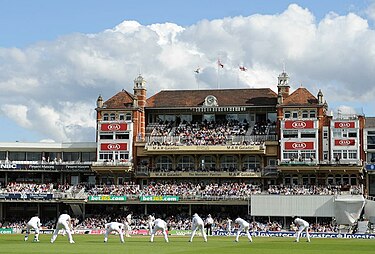 …a breezy five minute walk from our London flat at Chelsea Cloisters (our  annual summer “home away from home”)  on a District or Circle Line train, changing  at Embankment station to the Northern Line and thence a few stops southward to Oval station…

…thence across the street to the ancient cricket palace in all its glory. If like me you’re a visiting American with a sense of history you still can’t keep the old place from exerting its spell over you as you enter the ancient gate:

My ol’ pal Dave Holloway drove down from Sheffield with the tickets. After a breakfast of eggs florentine and chocolate croissants at Bibendum we tubed it to Oval station and walked through what is otherwise an elegant neighborhood of Victorian flat blocks and entered by the pavillion gate, where we were immediately solicited by a few “Save the Rhinoceros” activists, duly donating a couple of quid to a good cause. Thence to the obligatory ale bar for a glass of the “house” ale, Greene Park (or some such thing) IPA, which, to be honest, is awful. It was fizzy water for me from there on.

We come up through the grandstand tunnel to a splendidly sun-drenched oval of green on which the teams were taking batting, bowling and fielding practice. The warm sunny day encouraged the fair maidens of the Angel Isle to attend in all manner of short hemmed, low-cut sun dresses, adding to the general feeling of relaxation and contentment as an elephant walk of A-380 superjumbos lolled across the sky on their way to Heathrow hemorrhaging operating expenses. In conversation with some of the cricket aficionados sitting around us (“‘Ey! You a Yank?? Come far ‘ave you?”)  we learned that there had recently been a test match and then a women’s cricket feature at the grounds and that the surface of the wicket was likely soft and rough, not great for fast bowlers. In fact this proved to be the undoing of Sussex Sharks’ bowler David Wiese, pummeled for a century by Surrey’s Australian batsman Aaron Finch, who crushed seven sixes (ie, hit on a fly into the stands, one of which was a monster shot that sailed well over our heads) and seven fours (bounced or rolled along the ground to the boundary line around the field without being interdicted by a fielder). The Sharks’ Chris Nash batted a half century in his over but Surrey bowler Gareth Batty took his wicket with a yorker to end the threat.  Poor bloke almost spun off his feet trying to inside-out that ball.

Finally Sussex prevailed, 193 for 2 to 176 for 7. We left an over early to beat the crowds to the tube, and headed back to South Kensington for a superb nouveau-Levantine dinner at Ceru on Butte Street, a couple of short blocks down Brompton Road from the station. The memory of their sublime roasted pears in an orange blossom infused harissa yogurt with a lemon, cardamom, cinnanmon and rose water sauce will stay with me all the way home tomorrow.

So: I got my classic summer London vacation, complete with cricket, theater (we saw the RSC production of Queen Ann at the Theater Royal Haymarket),  lots of varied cuisines in the culinary fantasyland the museum district of South Kensington has become, slept late and ackcherley made it through two solid weeks without once leaving my umbrella someplace.

One thought on “Cricket! Sussex vs Surrey in a T20 on a Halcyon Day at the Kennington Oval.”