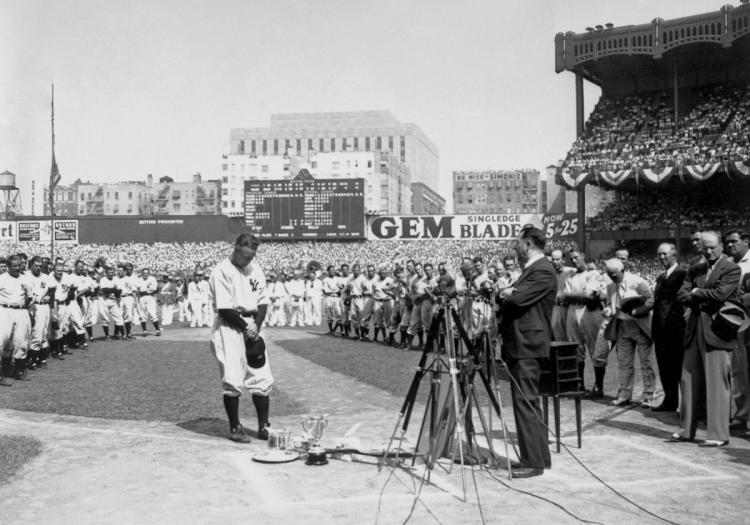 I’ve been working on a series of book reviews about the so-called “deadball era” when the playing fields of American were patrolled by Tolkienish giants aforetime and in those days before Spalding began stuffing baseballs with rubber and cork. In my last review I considered the career of the so-called “forgotten” great George Sisler, last man to bat over .400 twice. Sisler would likely be recalled as the greatest first baseman to play the game if not for one other Brobdingnagian figure. Today, I’ll consider an excellent biography of the man whose shadow obscures the memory of Sisler for some even though he represents a transitional period between the deadball and the jackrabbit, Lou Gehrig.

Jonathan Eig is a multitalented investigative reporter (which immediately ranks him several notches above your quotidian beat spawrtsriter) who also authored the classic Opening Day, the story of Branch Rickey’s search for the first Black ballplayer, which I have not yet read but was impressed enough by Luckiest Man to have ordered and will read .for a future review. Eig is also the author of one of the best books out there about organized crime and the inner workings of the FBI in the early days of J. Edgar Hoover’s federal satrape, Get Capone.  I read that one years ago and hadn’t immediately associated that Jonathan Eig with this Jonathan Eig.  However, if you’re as charmed by our proud national tradition of the criminal underworld as I am, I can’t recommend this book strongly enough. All it lacks in not containing the full text of Robert De Niro’s “teamwork” spiel it more than makes up for with its prose elegance and attention to detail.

Let’s turn our attention to the remarkable life and tragic death of Larrupin’ Lou Gehrig and Eig’s treatment of that star-crossed career. Like all of my favorite baseball books, this one is full of surprises and hitherto unsuspected twists and turns, as well as a cavalcade of idiosyncratic and eccentric diamond denizens – among whom, like Sisler, Gehrig could not be numbered. Again like Sisler Lou was the perennial straight shooter, a mama’s boy who was despite his keen intelligence also painfully shy and aloof. It took his hard drinking, strong willed, experienced (in the Hendrixian sense) ex-flapper wife Eleanor Twitchell, whom he met at a Chicago cocktail party (and not, as Pride of the Yankees would have it, as she ribbed him for tripping over bats on the ground at Comiskey Park) when he was 28 years old and for all intents and purposes rescued him from his protracted virginity, to extricate him from his shell and make something of a public figure out of him.

I’m going to assume for the most part you readers have a general idea of what a great ballplayer Gehrig was. His amazing career total  of 23 grand slams stood until the chemically augmented A-roid broke it a few years back. Even his final full season which looks sub-par for him when he batted .295, hit 29 home runs and drove in 114 RBI, slugged 170 hits for a .523 slugging percentage and struck out only 75 times while already struggling against ALS seems astonishing. By the time you’ve read that far you will have gotten to know him well enough to realize how irritated this dying man, even if unbeknownst to himself, must have felt about that batting average. What kind of contract would that have been worth today? One shudders and can only wonder how many more consecutive games the Iron Horse would have played if Stephen Hawkings’ Disease hadn’t interdicted his string of consecutive game appearances at 2,130. One of the things you learn from Eig is that Gehrig played quite a few of those games with broken fingers and torn muscles. Another thing you learn is that Jacob Ruppert, the owner of the Borg for much of Gehrig’s career, organized exhibition games during practically every single day orf from the regular schedule. If you added all of those games into account Gehrig ackcherley played close to another thousand or so consecutive games. It wears you out just thinking about it. Eig emphasizes, though, that through it all Gehrig was uncomplaining and always a gentleman. He rarely held out for anything like the salary he deserved, making less than half of what Babe Ruth earned in seasons when he arguably had much better years.

Living in the shadow of the Babe in his youth and early prime, and then in the shadow of a rookie named Joe DiMaggio during the last third or so of his career, never seemed to faze him and he never had an unkind word to say about them. Although the cockroaches of the spawrts press derided him for his “colorlessness,” he was satisfied by such of his reputation that intimidated opposing pitchers.   He felt so deeply grateful for the privilege of playing in pinstripes that pretty much every game – including one exhibition game in Norfolk where a jealous minor league lifer beaned him deliberately – was a blessing. Predictably, Gehrig played through the resultant concussion and left the bush league pitcher to the derision of his teammates because he couldn’t throw hard enough to knock Lou out.

In addition to wonderfully rendered accounts of some of the big first sacker’s finest and most memorable games, the author also paints memorable portraits of the key figures in Gehrig’s life and career. These include his dominating but dedicated mother Christina, his nearly useless father Heinrich who vacated the emotional space Lou’s mother willingly occupied, and a detailed portrait of Gehrig’s wife Eleanor. Another one of the unforgettable episodes in this biography is Eig’s narrative of the afternoon Eleanor and Babe Ruth got into what amounted to a drinking contest aboard an ocean liner heading to Japan for an exhibition tour. The incident effectively ended the friendship between the two men and was the low point of the couple’s marriage. Even so,  perhaps my favorite supporting  character of all, is the neurotic, insomniac manager of the Borg during the early part of Gehrig’s career, Miller Huggins. Eig tells us enough about him to make you want to find a good bio of the man. So far, I haven’t come across one but I’m still looking.

One of the funniest bits in this book is the story of how Gehrig’s wife and agent finally landed him some endorsements, notably becoming the first athlete to appear on a box of Wheaties. A few years later his agent negotiated a better deal with Huskies, a cereal which to my knowledge has gone the way of the dinosaurs. In a radio interview meant to plug Huskies Gehrig, succumbing to force of habit, said he loved Wheaties. Oops. A day later during another interview he was asked again about his favorite cereal. “Huskies,” he replied this time, “and I’ve tried them all.” I also much enjoyed Eig’s relation of Gehrig’s attempt to replace the retiring Johnny Weissmuller in the Tarzan film franchise,  but after posing in a leopardskin sarape for the role he was rejected because his legs, the source of his immensely powerful swing, were too thick and muscular.

I can’t say I “enjoyed” the detailed account Eig provides of Gehrig’s last few ALS-ravaged years. The correspondence between the slugger and his doctors at the Mayo Clinic as he tried to document the decline of his once mighty physique is tough to read in places, the unflagging optimism in the face of an irremediable death sentence both inspiring and agonizing to read. When it sank in that his “luckiest man on the face of the Earth” speech was from the heart and unfeckled by ego or showmanship I felt that I had waited far too long to learn more about the career of the man who lived in the shadow of the giant.

Eig is cognizant of the canyon, in terms of sophistication and talent, that separates writers of his caliber from the usual run of spawrts skribes. He avails himself of several opportunities to skewer his less capable erstwhile colleagues, making a point of citing some of their most clueless disquisitions.  Since yours truly rarely tires of pointing out what a bunch of self-entitled, primping, semi-literates hacks spawrts jernalists often are, I found Eig’s subtle if acerbic sallies enjoyable. These were spiteful little nobodies who sniped at Gehrig for being quiet, retiring and modest. The author rakes them deservedly over the coals. I give this baseball bio  a “highly recommended.”