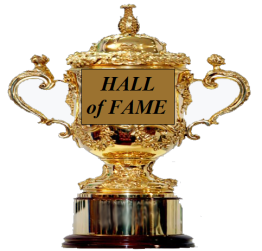 mately six hundred people live in my mother’s hometown, so, of course, they need a Hall of Fame. More specifically, they’ve created a Sports Hall of Fame. Even more specifically, it’s a plaque on the wall outside the high school gym, next to the cafeteria where they recently held the inaugural induction buffet dinner — so, really, a Hallway of Fame. Anytown, MI to the southeast, home of a lowly Class D athletics program, already has an HoF — though the school rival directly across the state highway does not. Not to be left behind in the Age of Celebrity, Hometown boosters jumped on the bandwagon for the project — developed by the special ed teacher/assistant basketball coach for credit towards her Master’s degree.

The purpose of the high school HoF — bear in mind this town is too small to have its own police department, though the district has an Athletic Director — is “to honor the community’s history and heritage” by recognizing local sports figures. In small burgs like this across the country, life really does revolve around public schools — and, especially, high school sports. It’s one of the realities that perpetuates patriarchal attitudes in rural areas and contributes to our country’s cultural obsession with youth. For places where almost literally everyone in town can be found at the gym, baseball field, or football stadium on a Friday night, what could better celebrate their way of life than a memorial to the athletes and adoring supporters who serve as the leads in the town’s play?

But, there is something disturbing in the notion that the history of our communities — that their central narratives — lie in sporting endeavors and that a community’s character can be found in the amateur physical contests of its children. Are boosters and school papers truly the documentarians of everyday American life (at least of the non-urban kind)? Is our history just a progression of pep rallies and sweaty youthful encounters? Does the captain of the team marry the head cheerleader and rear the next generation of jocks and admirers, ad nauseam? Is that really our heritage?

As tempting as it is to say Tennessee Williams cut to the core of the American experience with his story of Brick Pollitt and the small-town masculine culture that plays out through sports, a community HoF reeks of big-city emulation too. For a nation obsessed with heroes, local guys want to matter, and towns want a sliver of the limelight dominated by urban sports meccas. It’s hard not to mock small-time big-man celebrations, though — they are so obviously comical. Further, with a population base like Hometown’s, how exclusive can the membership be? The unexceptional will surely find their way in, as the search for candidates for the little brass nameplates stretches beyond single-digit classes.

There was a time when lots of Americans played athletics — in independent, work-sponsored, town, and various other leagues. People participated even if they weren’t the greatest, and their unremarkable involvement wasn’t about whether it mattered, as opposed to just being part of a culture of recreational activity. There were less ways to serve as a spectator then, and that probably explains why — now that we have one thousand sixty-seven channels and sports premium packages on — we watch instead of play.

Maybe you lose something by sitting out, while the best of the best get their due credit. If so, it is tempting to say the Hometown HoF is a noble effort to keep mass involvement (and, perhaps, a kind of democracy) alive. At least for local historians, their stories will be preserved, and if you wanted to root around all of the petty HoF’s in this country, you might get an interesting narrative out of it. That you would get the story of the heartland from them is less certain — anymore than that you get anything like the country’s heritage from the national HoF’s.

It’s undeniable, though, that we have a human impulse for history and, at least in our country, for celebrating great men. Choosing to funnel that urge into sports honors as opposed to an arts (side)walk of fame or a historical display dedicated to the work, faith, and political or natural events in a community says something itself about a place. Maybe the folks in Hometown think that the biggest thing about them is that they produced a guy who couldn’t get past the minors because he blew out his liver, but I can assure you, it is not.