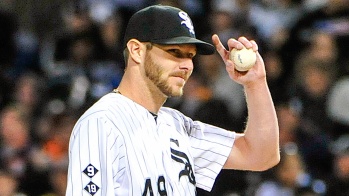 The biggest name being floated in Hot Stove news is Chris Sale. The White Sox ace has been discussed in trade rumors featuring the Washington Nationals, Texas Rangers, and Atlanta Braves among others.

The left handed pitcher is one of the most coveted arms in baseball, and with his team friendly salary ($21.15 million over two years, with two option years at $12.5 and $13.5 million) he’s one of the elite players who will more than likely begin the year in a different uniform.

Let’s talk about some of the teams being discussed in regards to a Sale trade.

One of my favorite baseball writers is the Nationals beat writer, Barry Svrluga. He has an excellent article in the Washington Post about why Washington should pull the trigger on a Sale trade, and who they could give up. One of the best rumors involve Lucas Giolito and some solid A prospects for Sale.

But could you imagine a rotation with two time Cy Young award winner Max Scherzer, Stephen Strasburg, and Chris Sale? On paper, they would be ridiculous.

While there’s been rumors of the Rangers and White Sox talking about a Sale trade since earlier this season, trade sites keep bringing up Jurickson Profar and Joey Gallo for Sale. Texas GM Jon Daniels keeps saying that all options are open, but most observers don’t think that Daniels would trade both future stars for Chris Sale. However, the Rangers need starting pitching desperately, having only one reliable arm on staff, and that arm belongs to Cole Hamels. Yu Darvish is a great pitcher, but has been injury prone, and lefty Derek Holland is a free agent.

The strongest rumors involve Atlanta. The Braves have stockpiled more pitching prospects than your average team, and they have a couple of high profile outfielders that would be more than enough trade bait for Chicago. A lot of rumors include either Mallex Smith or Ender Inciarte with a package of young arms for Sale (guys like Max Fried, Aaron Blair, and Matt Wisler). Most people do not think the Braves would be willing to get rid of Inciarte, who just won the Gold Glove this season and was a highly effective leadoff hitter for the team. Other prospects being discussed include Ozzie Albies and Touki Toussaint.