We discussed 1-5 yesterday in my first post, and I will be breaking down MLB’s list of the top free agents available again today, resuming with 6-10.

Ian Desmond – SS/OF. — Desmond is a curious case. He took a chance on the open market instead of taking Washington’s qualifying offer, but then found that interest in his skills after a particularly off year dropped. He ended up signing an incredibly cheap one  year deal with the Texas Rangers, but then went about proving that the 2015 season was a fluke of sorts. 22 home runs, 21 stolen bases, and excellent work in a new position of outfielder proved that Desmond is still a quality player of substance that will help a team. The question is whether he will sign with a team who needs a shortstop (his natural position), an outfielder, or if they will try to convert him into being a newfangled Ben Zobrist?

Wilson Ramos – C. — The first player on this list who is under thirty is also the first player on this list who will not be ready to start the season with whichever team decides to pick him up. Ramos tore his ACL late in September and will not be available for duty until probably midseason. While teams will bring in catchers after the All Star Break – the Rangers and Jonathan Lucroy is the latest example – it is rather rare to do so. By this time, most pitchers will be content to dance with the ones what brung them, as it were. According to the MLB list, Ramos lead the league in wRC+ for his position this season, and catchers are in high demand no matter what. I’m sure he’ll find a suitor. I mean, heck, if A.J. Pierzynski is still getting his tires kicked, I am sure that Wilson Ramos will get in where he fits in. 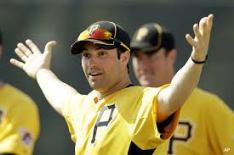 Neil Walker – 2B. — I’m biased. I like Neil Walker a lot. I think he’s underrated, that he’s quality, that he’s as valuable on the field as he is at the plate. I would do anything to get Neil Walker on the Braves, but I’m sure that he won’t be darkening the door of White Flight Park anytime soon. That being said, a switch hitter who is consistently good will be highly coveted by many teams. While Walker is also recovering from surgery, he will be ready by Spring Training, and ready to continue on the path that has given him an average 2 WAR for most of his career.

Aroldis Chapman – P. — He throws a wicked fastball that routinely tops out at 100-103 MPH. In his five seasons as a closer, Chapman averages a sub 2.00 ERA and has converted over 90% of his saves. In this era of dominant bullpens, Chapman would be an attractive pickup for any team who needs a closer. Do we talk about him not being so sharp during the Cubs’ playoff games, including his vulturing of Game Seven of the World Series? We can if you want to. Do you want to talk about the fact that he’s a creepy wife beater who still hasn’t truly admitted that he did wrong and apologized? Sure, we can talk about that, too. I don’t want him back with the Cubs, and I sure as hell don’t want him with the Braves, but your mileage may vary.

Luis Valbuena – 1B/3B. — This rather unknown Astros infielder had hamstring surgery this year. I’ll admit I don’t know much about Valbuena – perhaps our friend Stex can help out? I’m only up on my Altuve and George Springer news, not so much other Astros players (for the most part). Valbuena is a lefty, which is always highly sought after, and according to the MLB list has stats that rank him above Todd Frazier and Evan Longoria during the season.

So, what do you think? Any of these players appeal to you? Do you think, as I do, that at least one or two of them would have been more valuable a commodity than Josh Reddick at number five? And would you want Chapman on your team?