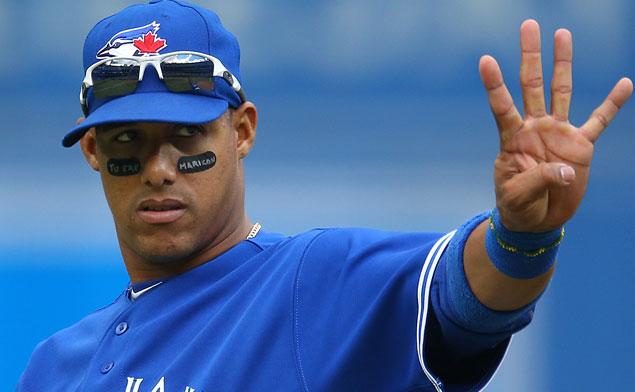 Yunel Escobar was ejected for the third time this season yesterday.  This time he found a brand new way to get the old heave-ho.  You see, Yunel was playing short stop as the Los Angeles Angels employed the shift against Chris Davis of the Baltimore Orioles.  This was the final game of a tightly contested three game set in Camden Yards, in which the umpires were questionable at best.  Both sides were complaining for days about shifting strike zones.  What was a strike last inning was now a ball.  There was no rhyme or reason.  The only positive was that the officiating was terrible for both sides.  Anyways, it was now the 7th inning, and Chris Davis was at the plate.  The count was 1-1 and Chris checked his swing.  The umpire ruled Davis held up his swing much to the dismay of Escobar.  As you’ll see below, the call was boarder-line at best and probably could have gone either way.

Before the next pitch could be thrown, umpire Tim Timmons signaled to Escobar.  At first no one knew what had happened.  I was listening to the radio on my way home from the gym at the time and the announcers were very confused for several minutes before Escobar walked off the field.  It seems Escobar drew an exaggerated home plate on the field in an attempt to help aid the umpiring crew’s inability to as he saw it properly call balls and strikes.

So, Yunel Escobar was ejected for drawing a home plate in the dirt behind third base to instruct the umpires, which, wow.

Sure it was a bit of a dick move, but I do have to wonder if the officials didn’t overreact on this one.  They could have very easily given out a warning or spoken to him in-between innings.  I have noticed an increase in not only terrible officiating lately, but umpires in general seem to have their egos bruised a little easier now.  We have talked for years about how umpires really should have a proper grading system, and the worst should get demoted to the minors and the best minors should be promoted.  It seems to me that with the advent of replay (Which arguing is an automatic ejection) and that arguing balls and strikes is an automatic ejection, umpires have gotten a little too quick with the thumb.  A good umpire should fade into the background, completely unnoticed by the game going on around them and lately more and more umpires are getting involved in the game, and MLB is doing nothing about it.

Escobar understandably was less than thrilled with the early start to the All-Star break.

Yunel Escobar declined to speak to reporters after today's loss. "F*** that s***," he said when asked to answer questions.

If nothing else, you at least have to give Escobar some credit for finding a new way to get kicked out of a ballgame.

2 thoughts on “Yunel Escobar Ejected For Drawing In Infield”