Get your popcorn and fold-able chair ready ladies and gents.  The New York Mets have announced they are activating Jose Reyes.

On the final day of October last fall, Jose Reyes allegedly grabbed his wife, Katherine Ramirez, by the throat in their Hawaii hotel room and shoved her into a sliding door. The incident left Ramirez, according to a police report, with injuries to her neck, the side of her body, and her wrist. Reyes was arrested on misdemeanor charges of abusing a family member.

Eight months later, those remain the sole details we know of that day. Charges against Reyes were dropped because Ramirez refused to return to the state to cooperate with prosecutors. While Major League Baseball dispensed investigators to the locale, they did not reveal the contents of their investigation. But commissioner Rob Manfred did punish Reyes with a 51-game suspension — the second-longest of three punishments MLB has meted out under its 10-month-old domestic violence policy.

Prepare for the boos.  The cheers.  The Op-Eds.  Many of them from this very site.  Sadly, we all deep down, knew this day would arrive sooner or later.  Although Reyes’ abilities are in decline (He can still hit a little, however as I’m told by you very readers, his defense has turned to shit.), he is still good enough to tempt a desperate, misguided team into acquiring his services.  Of course, the topic of Reyes’ return will be a much discussed one.  Should a player who committed such a terrible act be banned from working again?  Is that right?  He was punished, and served his punishment, and while we can all debate the appropriateness of said punishment, and can bring up how he very clearly escaped proper legal persecution, is it right to completely ban him from baseball?

“It’s really concerning,” says Matson, co-director of a reproductive rights organization. “There’s a part of me that just feels incredibly sad that at the end of the day baseball is a business. And I get attached to players that come and go, but it’s business decisions that come and go who is on the roster. Period. So let’s talk about the fact that in 2016 there’s still highly paid people making a business decision that someone with this public track record on domestic violence is considered a profitable asset.

“It’s stunning to think about that. That’s just where we are.”

So what should be done about it?  Should MLB have completely banned Reyes from returning?  Should all the teams have blackballed him?

Still, as she expresses her indignation, Matson comes to a stop when asked if Reyes should be able to play again. This is where the policy-making of punishing domestic violence jars with the morality of it. Where her life as a victim meets her experience as an advocate.

“While it seems really good to say ‘Oh, you should be banned from the sport entirely’ – and there’s a part of me that’s right there – but from a victim advocacy standpoint what makes me very uncomfortable about that is that actually places an incredible burden on people who may be abused,” she says. “It might actually put them more at risk because if your abuser is caught, whether or not it’s your fault, there’s something much bigger at risk. You hear about this at victim advocacy community — if their abuser loses their job not only are they at more risk because the abuser is at home more, but also that anger may come out at them.

“I just want to throw that out there that it feels really satisfying to say that people should be barred and on a certain level I believe that, and yet, on that, I’m afraid of constructing black or white policies that might in fact place victims in more danger.”

Zero-Tolerance policies are troublesome, because they actually increase the risk to those that are abused.  You see, if a player knows that once 911 is dialed, their career is over, the risks of homicide shoots through the roof.

So no matter what you think of the person Jose Reyes is, remember that sadly, the situation is not as cut and dry as we may desire it to be.  We may all want Reyes to go the hell away and never come back, he still has a right to go back to work.  Of course we have the right to boo him and remind him every opportunity what a piece of crap he really is.  Just don’t ever forget what happened last fall.  Don’t forget when Reyes gets a game winning RBI that he is an abuser and doesn’t deserve our admiration or respect.

ScoutsUpdate:  Reyes received a standing ovation upon his return to the Mets.  New York, you disgust me.

ScoutsUpdate: Thanks for making it even easier to hate New York fans.  Granted not all are bad, but holy shit, this is just offensive and disgusting. 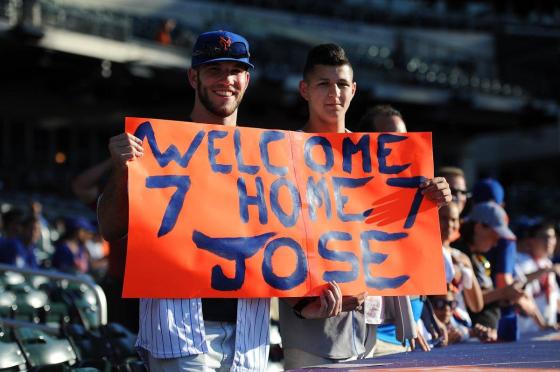 “I didn’t want him back considering what he did, but he seemed to be regretful and he seemed to be sincere so he’s worth giving a second chance,” said Nancy Kelly, 55, a yoga instructor from Northport, L.I.

Well it’s nice that he regrets brutally beating his wife, grabbing her by the throat, and slamming her into a glass door.  Good for him.  What a swell guy.

Ashamed does not even begin to describe how Met fans should be feeling right now.