With a double to right field off San Diego Padres pitcher (closer) Fernando Rodney in the 9th, Miami Marlins outfielder, Ichiro Suzuki notched his 4,257th hit in his career, passing Pete Rose’s all-time (international) hits record in the professional high level, with hits in both the NPB and MLB. Earlier in the game, Ichiro tied Pete Rose’s number 4,256 via infield single.

Everyone, and I mean everyone in Japan was tuning in to watch this very moment, JP sports shimbun was recording every piece of it… witnessing the player they idolize to accomplish, as what they say, the near, and almost impossible in Baseball feats… In unison, showing their all-out support to the “once kid” who came in the league as a low draftee pick in Japan, making waves of accomplishments, and milestones in a different league that far match their own. 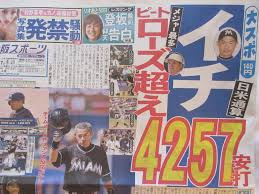 Japan’s Prime Minister, Shinzo Abe, who also followed Ichiro’s record, stated: “An amazing feat, that’s nearly impossible to do, a Japanese athlete once again made a monumental contribution… I feel immense pride as I see Ichiro-san accomplish this.” Abe said, regarding about Ichiro’s magnificent feat.

With us still in the month of June, there’s a very high chance that Ichiro will have his 3,000th MLB hit this year.

Also, via sports video Ippai I posted here above, they too (JP Yakyu sports commentators), along with a large number of Japanese Baseball fans, and JP media outlets in the country are all well in agreement, that Ichiro’s NPB hit totals does not equal to his overall MLB hit stats, but, rather… to his overall top level hits in each respective leagues, leading to his career International top level Baseball hits compiled (1,278 NPB + 2, 979 MLB = 4,257 International hits overall garnered at those levels).

They know very well, and have accepted the fact way back when Ichiro was still a Major league rookie, that Pete Rose is still Major league Baseball’s all-time hit king today, what they’re just trying to do, or make here, was just add his NPB + MLB hits to something remarkable cause accomplishing a feat like this, though different the leagues may be, is still a monumental moment, and achievement for them as a whole nation… and that is for them celebrating their fellow countryman, Ichiro Suzuki, as Baseball’s International hits king… They are not trying to take away Pete Rose’s achievements/accomplishments in the Major league level.

In one of the previous articles covered here, Ichiro Suzuki is still very open to play Baseball even at age 51. It will no doubt be interesting to see how many hits he’ll amass playing through at that age. Cause, so far from what we’re seeing, Ichiro continues to defies age by hitting .349 today, going 44 for 126 (JUST 7 FREAKING STRIKEOUTS) this 2016 season.