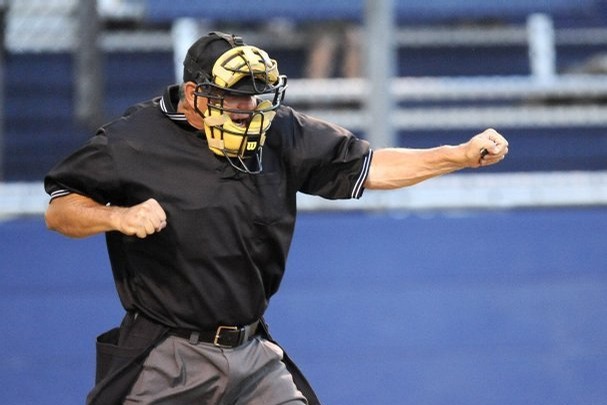 6/8/2016 – Baseball Commissioner Robert D. Manfred, Jr., Major League Baseball Players Association Executive Director Tony Clark, and President-Elect Donald Trump, the Chairman of Major League Baseball’s Race of Game Committee, today jointly announced additions to the sport’s race of game program, which will be effective immediately, through the remainder of the regular season and the Postseason. The World Umpires Association also has given its assent to the new efforts.

•    The race of game program will enforce the umpire’s assumed ethnicity rule, requiring that all batters and pitchers judge the race or ethnicity of the home plate umpire at the outset of each game, during a pitcher change and/or during each at-bat. The batter and pitcher must agree that the umpire is the same or similar in racial composition to themselves. If either player believes the umpire’s race is different from their own (see Racial Profiles Matrix below), then they may veto the umpire from calling balls and strikes for the remainder of the game, pitcher’s appearance or at-bat. This rule is in direct response, and in correlation with, the “Trump rule”, which considers any judge of a different race than the judged to be inherently biased and completely unable to make an impartial ruling.

•    In the event the umpire disagrees with the batter and pitcher’s assessment, he may appeal using one phone-a-relative per game and/or present a long-form birth certificate and genetic test completed by one of the listed labs in listed Section G.F.Y.(1)*. Assuming proper documentation is shown, the players may still veto said umpire based upon their own feelings about whether or not the umpire is truly part of their own race or simply an imposter trying to steal good White American Jobs (WAJs).

•    A second new component to the race of game system is the new Racial Profiles Matrix (RPM) which is outlined below. 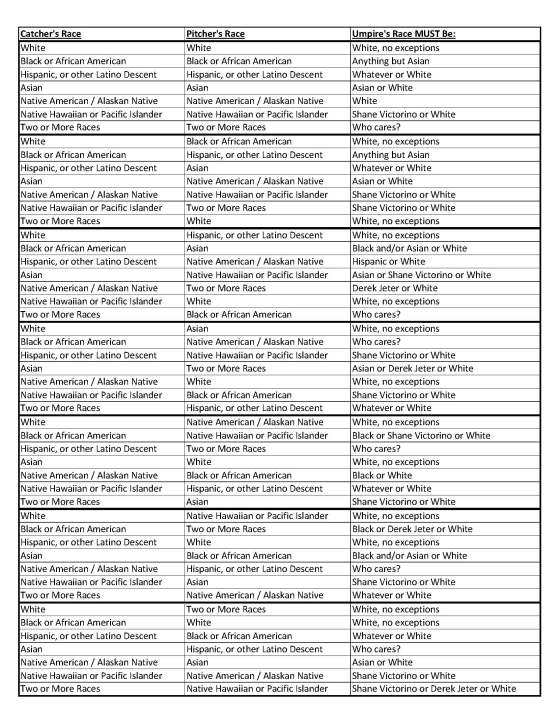 •    Batters will be encouraged to assess the umpire’s skin tone and features as he approaches the plate from the on-deck circle, if not sooner. Pitchers will make their assessment at the start of the game or immediately upon entering the game from the bullpen.

•    If there are no Native American ballplayers at any given time, then there cannot be Native American umpires. That said, no matter the circumstances, the Cleveland Indians’ logo will remain unchanged.

•    These rules will be enforced through a warning and fine system, with discipline resulting for flagrant violators (i.e. racial imposters mostly of mixed ethnicity who think they can sneak into any racial group). Donations will be made to the Major League Baseball Players Trust charitable foundation based on the level of adherence to the new rules.

*Really? GFY? You so naïve.

**I hope you read this with some level of discomfort, perhaps even disdain, or you have a problem 😉

9 thoughts on “MLB Rules Update: Umpires Will Only Judge Balls/Strikes for Players of Their Own Race”