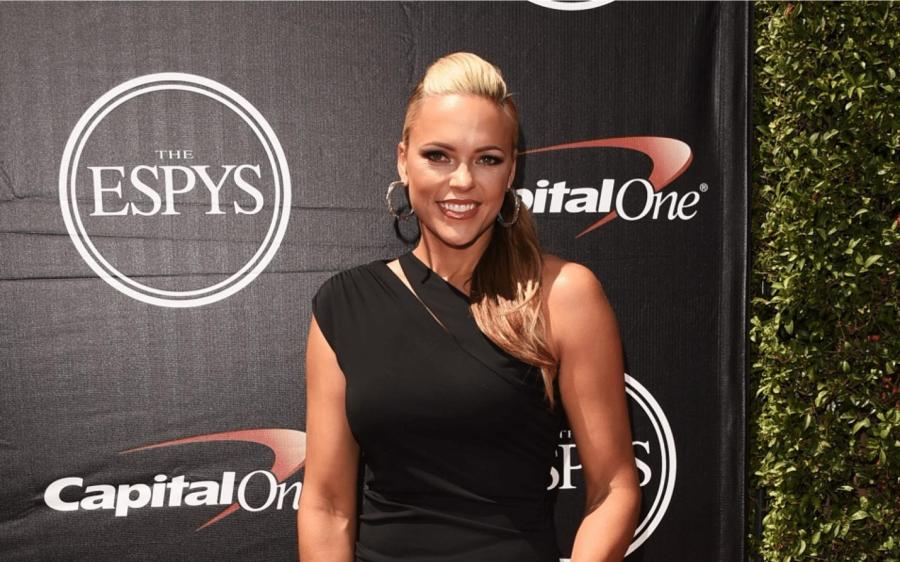 Per the Washington Post, famed softballer Jennie Finch has an upcoming one-game gig managing a men’s baseball team. They’re like professional male players and everything. I mean, it’s minor leagues, which is totally on par with women’s Olympics, right? Fittingly then, Finch will make history again in American sports — this time for being the first woman to manage a professional men’s game (the last time, of course, for being a kick-ass player).

Anyway, here is the picture that the Post opted to use for it’s story:

I’m sure you can guess why the pic gave me pause. I went through several mental shifts when I saw the story.

First, I was a little annoyed: that American myth about working your way up and being successful? I’ve internalized that too. So the hard-work-self-made-woman me thought this is so not fair for Justine Siegal, who, as you know, has worked really hard to break into coaching. Siegal is over-qualified educationally and has shown dogged determination to become a coach and prove herself against men on her merits. I want her to succeed, but she isn’t getting a shot at managing a men’s team — she’s still trying to get hired as a full-time coach.

Even her picture suggests she’s about baseball knowledge and not succeeding on looks.

Still, I can’t hate Finch for getting a shot because she’s pretty and famous, though she didn’t work her way up. I forget who said it now, but a wise feminist has pointed out that the best women succeeding is not equality. We will be on par with men only when an average woman can make it as far as an average man (cough W cough).  In that sense, it’s not right to compare Finch to Siegal. We should compare her to Brad Ausmus, right? He was a solid ball player too, and he got a managerial job because of his notoriety (and looks?) rather than working his way up coaching. If it works for Ausmus, it should work the same for Finch.

Of course, Ausmus got a full-time managerial contract for three years with a competitive MLB team — not a one-time PR stunt position in the minors. So, yeah, no parity for beautiful female ex-players yet. Hell, Finch doesn’t even have parity with Ozzie Guillen or Matt Williams, who certainly didn’t have to trade on their looks to breeze into a full-time top job as former players (acknowledging that Williams had minimal time as a coach before managing and Guillen also did a little coaching first — something women have not yet gotten a shot to do). None of the major league teams are offering Finch or any other female former players coaching jobs, much less full-time management jobs — even trading on their looks, and this token opportunity won’t change that a bit.

But, Finch gets to make a little history and it’s great for the baseball PR machine that the first female manager of a men’s team is good-looking as well as knowledgeable. The photo ops will be dazzling and the sound bites informed. I’d like to see this as progress, but Siegal is still fighting her way in and Finch doesn’t have a serious position — and Kim Ng is still out of GM contention, while AJ Preller moved up quickly due to his frat-boy connections. Let’s not forget that there is NO bona fide job requirement to be male to manage a team or run a baseball operation; there is no good reason these qualified women cannot do such jobs. In the end, the illusion of progress is just the same as failing to promote women.

Good for Finch — I’m proud of her and hope she has a great time, but this is not a milestone for the feminist movement. Stunts like this are just distractions that feminists should find entertaining, while not deterring us from the ongoing good fight for equality. There will be women in real baseball positions someday.

16 thoughts on “A Woman Got a Baseball Job!”