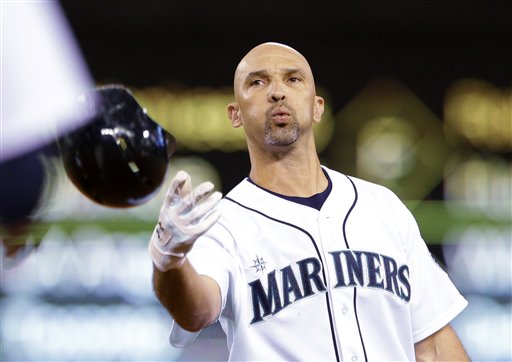 Former Major League player Raúl Ibañez has joined the Baseball Tonight crew, replacing the horrible waste of oxygen Curt Schilling who just can’t seem to keep his mouth shut.  I could go on about the continued idiocy of Schillling, but I’d rather not give that assclown any further attention.  This is supposed to be good news day at FI!  Let’s rejoice in ESPN getting a little less terrible.  ESPN didn’t give anyone a whole lot of notice, releasing the press statement just hours before Ibañez began his shift last night working the Rangers/Yankees game.  If anyone saw it, how did he do?

Ibañez signed a multi-year deal with ESPN and is expected to contribute to SportsCenter as well as Baseball Tonight, and any other news and information programming in addition to working live games in the booth.

He played 19 Major League Baseball seasons, debuting in 1996 with the Seattle Mariners and last playing in 2014 with the Kansas City Royals. He also played for the Philadelphia Phillies, Los Angeles Angels of Anaheim and the New York Yankees. He was an MLB All-Star in 2009 with the Phillies.