April 14th is Greg Maddux’s 50th birthday. On this very special (to me, at least) occasion, I want to celebrate what was literally the greatest day of my life – the day that Greg Maddux was inducted into the Baseball Hall of Fame. I know, it’s sad that it’s the greatest day of my life, but it was. I also know that many of you will not believe that this happened, but it did. I can barely believe it happened, either.

However, in order to truly understand what occurred on the the greatest day of my life, I need to lay a little groundwork. This is that groundwork.

It was very important to me to attend the induction ceremony. I made an oath that even if I had to sleep in a box, or a ditch, or not eat the entire time I was in Cooperstown, I would get there. I specifically got a second job and worked myself to the bone to be able to afford it. Nearly wrecked my health, sacrificed vacations and time with loved ones just for a three day weekend by myself to watch my favorite baseball player of all time get a plaque on a wall.

Yes, I know that sounds silly, but it was important to me. Mostly because to my eternal sadness, I never got to see Greg Maddux pitch in person. And I decided that celebrating his greatness would at least make up for what would be the greatest regret of my life.

Let’s start at the beginning of this story, which was late Friday evening the weekend of the ceremony.

I flew into Syracuse and rented a car to drive to a small town outside of Cooperstown where my incredibly modest lodgings were. I was exhausted. Although I had been travelling literally all day, driving nearly three hours to Milwaukee just to catch a plane that took me to Chicago, then to Syracuse, and then drove several more hours late into the night to my hotel, this was the first day I had off in almost five months. Yes, I worked every single day, sometimes 15-16 hours a day between my two jobs. Dedication or stupidity? You decide.

I was so excited, I couldn’t sleep. Of course, I also suffer from chronic insomnia, so not sleeping isn’t something that’s new to me. However, I had to get some sleep because Saturday was going to be a huge day for me – I would finally step foot in the fabled, mythical home of baseball, tour the Hall of Fame Museum, rub elbows with fellow baseball fans, and finally, see the parade of Immortals driving down Main Street, culminating with an appearance by two of my most favorite players of all time, Tom Glavine and – my forever hero – Greg Maddux.

So, I overslept a little bit. It was still very early, but not as early as I wanted it to be. I slapped on some extra concealer to cover up the horrible black circles of exhaustion under my eyes, ate a bagel and a hard boiled egg from the breakfast bar at the hotel, and began driving to Cooperstown.

Now, there’s not a lot of parking in the village. There is, however, a trolley that goes around to various parking lots on the outskirts of the village that takes you to the Museum. The one I chose was near Clark Sports Center, where Sunday’s ceremony would be. It gave me the lay of the land for Sunday, and also a good place to start out for Saturday.

It was very quiet at the parking lot. It was me – dressed in my 1989 Cubs Throwback Maddux jersey – and two middle aged men waiting for the trolley. They were immediately very kind to me, asking me questions about where I was from, was I a Cubs fan, the level of my fandom, etc. One gentleman was named John. He was from Las Vegas. The other fellow was his brother Jim, who lived in California. We struck up a conversation and John, an incredibly genial man, asked me if I had ever been to Cooperstown before. I told him no, but that I had been doing a lot of research and I knew a lot of stuff about where to go, where to eat, how to skip the lines. I mentioned that I’m a member of the Hall and that I could skip the lines and get in for free. John and Jim asked if I would like to hang out for a while because they thought it would be fun. I agreed; spending time with others talking about baseball is one of my favorite hobbies. It was about forty-five minutes into our conversation that John mentioned a little factoid that would change the entire weekend.

“So, I figured you should know this, but Greg and I are friends! That’s how I got tickets to the ceremony.”

I didn’t believe him at first. But he showed me his phone, which had an old series of text messages. Either this guy went to an extreme to fake that he knows Greg Maddux, or it was true. No, I didn’t memorize the phone number, because I’m not a creeper.

But yeah. I kinda freaked out a little bit. 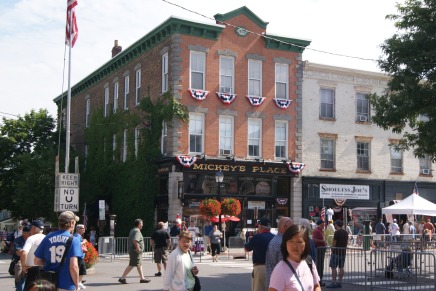 The Village of Cooperstown is quaint, beautiful Americana. On this weekend, this sleepy little town’s population exploded to about 45,000 people. At least 3/4 of them were Braves fans, and a 1/3 of what was left were Cubs fans. You couldn’t throw a rock without hitting someone wearing a Maddux jersey. It was without a doubt the most beautiful sight.

We walked around the village for about an hour, seeing lines to meet such baseball legends as Dale Murphy and Orlando Cepeda. This was the year of the infamous John Rocker “Bar Crawl Raffle”, and I saw the disgraced Braves closer with my own eyes, selling black tees with the words “Speak English” in a white Old English script emblazoned on them for entirely too much money.

It was time for me and my new friends to bid each other farewell, but John and Jim insisted on catching up with me for lunch later on, so I did.

I went into the museum, looking with awe at artifacts which belonged to people I revere more than almost anyone else in my life. People like Lou Boudreau, Robin Roberts, Stan Musial, Tom Seaver. And then, I made my way to the area with the stuff from that year’s inductees. Maddux and Glavine, side by side, and I nearly cried with joy.

Seriously, this was so bad.

After I left the museum, I did indeed meet up with my new friends at a cheesy bar which was next door to a wax museum. Friends, the worst waxwork figure of Greg Maddux that a person could have ever made was out in the middle of the courtyard. Do you remember the clay bust of Lionel Richie that the blind lady in “Hello” crafts? You know how bad that is? That’s like photographic compared to this thing.

In the middle of eating my hamburger, John decides to drop yet another surprise on me. “Oh! I saw Greg’s cousins while you were in the museum. I’m gonna go see if I can find them.” Off he went, leaving me to have a panic attack at the thought of meeting family members of my hero.

About fifteen minutes later, a gaggle of people came to the table. All smiley, happy, incredibly warm folks with what I can only say are twinkly Maddux eyes. All Madduxes have them. Greg does. Mike does. The Boy does. And these cousins did. I knew they had to be Madduxes because of their eyes alone, plus one of the cousins who sat closest to me looked a lot like Mike Maddux, only feminine and with grey hair.

To my shame, the only cousin whose name I can remember was Paula, the one who sat closest to me. She, like the rest of the cousins, were from Indiana, the ancestral Maddux homestead before Dave (Greg and Mike’s dad) decided to go West after retiring from the Air Force. I took the opportunity to talk to them, and it was all very pleasant. Paula and another cousin – who I will call “Youngish Cousin” because she was probably in her mid-40s – took quite the shine to me.

Finally, my social anxiety went through the roof. Even though I was itching to ask more questions, and Paula and Youngish Cousin both seemed very sad that I got up to leave, but at that very moment I felt like I was going to have a heart attack. Plus John Smoltz was signing autographs and the line was getting really long, and I didn’t want to miss it.

I thought I’d never see the Cousins Maddux again. Why should I? As I mentioned, the village swelled to about 45k people and every other person wore a Maddux jersey. I am unmemorable in every way. But I was wrong.

On my way back from getting Smoltzie’s autograph, I passed the cheesy bar again and heard this “Hey! Come here!” It was Youngish Cousin, calling me over. “We just wanted to tell you that Mike, David and Linda have all come to town!”

Rickey Henderson. Notice how close I was to the parade route.

Finally, it was time for the parade. Nearly all of the living Hall of Famers were in the parade (as usual, Sandy Koufax was a no-show). I got to see Ernie Banks waving to the crowd. The show of respect was tremendous; the entire crowd chanted “Let’s Play Two!” and cheered. Johnny Bench played to the fans; dancing and waving in the back of his truck; George Brett was friendly and outgoing. Tom Seaver came by and I literally leapt into the air in excitement. Finally, it was time for the newest members of the Hall to make their way towards the Museum through the throngs of adoring fans. They came in alphabetical order. First it was Bobby Cox. Then, Tom Glavine and his beautiful wife, Christine. I cheered and cheered, nearly yelled myself hoarse. Then Tony LaRussa and then I could see the man of the hour, my favorite baseball player of all time, my greatest hero.

It’s hard to describe how I felt. Time seemed to stand still. His lovely wife, Kathy, sat beside him, all smiles. I was, incredibly, not nervous. It was a perfect moment to a perfect day. But when my hero and his fair lady had passed our way, I cried. I wasn’t ashamed to do so. It was a happy cry, the kind that you have when you are overwhelmed, and words and emotions just can’t describe how you feel.

It was a feeling that I would soon feel again, on Sunday.