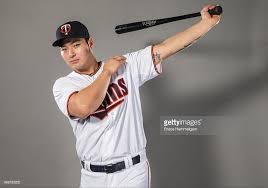 New Minnesota Twins addition Park Byung-ho (29 years old) blasted his first Major league homerun in the big leagues today, facing off against KC Royals Joakim Soria at the top of the 8th inning, on a 1-1 count, Park blasted one deep to left for a solo shot, giving the Twins a 3-2 lead in the late innings. The distance of his homerun was said to be 132 meters, and the ball left his bat at approximately 111 MPH. The Twins lost the game 4-3. Nevermind the loss, it’s still a long season with MORE homeruns to hit. Welcome to the Major Leagues, Park!

Park is currently hitting .222 (2 for 9) in 3 games played so far, now with a homerun and an RBI under his belt in his first year playing in the big leagues.

5 thoughts on “Out of the park for Park, blast first career homerun in the Major Leagues”