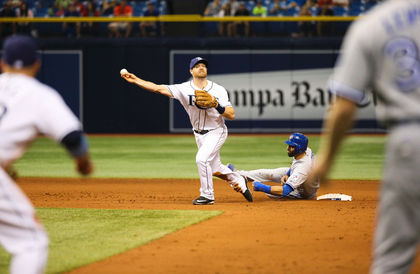 I got home in time to catch the final couple of innings of my first baseball love, the New York Metropolitans, as I prepared dinner. They won their first victory of the season against the Royals of Kansas City, 2 – 0. Yes, I am bi-league with strong American League preferences. Sadly, I missed the beautiful Son of Odin, but looking at the score and boxscore, I can see he laid down the hammer: 6 IP, 0 R, 3 H, 9K, 0 Walks. I would call that a Quality Start for the young Syndergaard.

Have I mentioned this is my favorite time of the year? Yeah. I tuned to Sunsports to catch my new love, my true love, the Rays. The Rays won 3-2. What was interesting about the game is that it ended on a