Today is a great many things. I found out it is Pony Express Day. American Circus Day. Fish Fingers and Custard Day. Armenian Appreciation Day. But most importantly, it is my favorite holiday of all: Opening Day. I’m guessing it may be yours too?

There are THREE real actual Major League Baseball games that count in the standings today, one of which I shall be attending, and I am right now besides myself with excitement. I am making eggs, bacon, making coffee, listening to the best soundtrack ever (Guardians of the Galaxy: Awesome Mix Vol. 1 which has been on almost constant loop for about 96 hours now.) I can barely sit down to type this. I have great seats too. I am by the third base side, lower level, just a few rows back of Evan Longoria and Josh Donaldson. Great defense is a gift from the gods.

Yes, I know, I am going to Tropicana Field–who gets this excited to go to there? It’s Opening Day, and today is the rare day that there is a festive, party atmosphere at the tumulus. It is a sell out, so I have to prepare myself for a rarity. Humans. I typically own that building, but today, I have to share it. That’s okay. Although I truly appreciate the bonuses that come with a putrid fan base–always look at the bright side of life–I really like sharing my team. I wish I could share it more often. The Rays are playing the Blue Jays at 4pm ET on ESPN2. 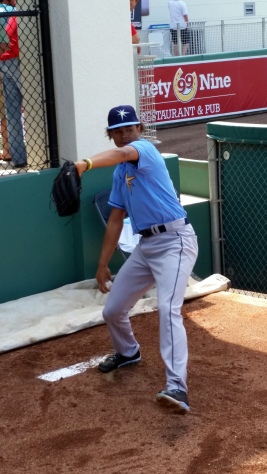 Chris Archer is getting the start. I chat about him a lot here, and it’s for a very good reason. No, not because he’s handsome, although sure, who doesn’t like a pretty face? He’s the face of my team–a great talent–and he is the rare player from a small market team that gets national love for his earnest ways, and articulate and intelligent manner. He’s an MLB star. He does so much for charity, a lot of which we never even hear about. He reaches out to other teams when he visits and asks them, “What can I do for your community?” The GM I nursed told me he does this. He overcame a lot of adversity to be where he is, abandoned by his parents and raised by his white grandparents. The Tampa Bay Times gave him a great write-up yesterday. It talked all about his recent meeting with President Obama. Obama reached out to Archer first, referring to the young pitcher by his nickname, “Arch!” Anyhow, this wasn’t supposed to be about all about my team. I digressed. 🙂

The Blue Jays are in town, and I like this team, even though they vex mine a lot. Marcus Stroman gets the start for the Jays, and I like that young man too. I won’t be rooting for them AT ALL–as if!, but as someone who is a big fan of Canada, maple syrup, and their universal health care system, the Blue Jays get my love as their sole baseball representative. Plus, that is one cool bird. They kick ass at the bird feeder, super aggressive.

The Jays also have some pretty cool players of their own. I’m a big fan of Florida native

Josh Donaldson, who much like Archer, has overcome tremendous adversity to be where he is today. His dad was in prison for most of Josh’s childhood for sexual battery and drug abuse. His single mom worked as a bartender and bookkeeper to make ends meet. No one ever thought he had a chance to make it to the majors, but here he is, Mr. MVP. He says he watched a lot of video of Jose Bautista batting way before he became a Jay. It’s a prescription I would recommend for any hitter who wants to learn how to bat properly. Joey Bats’s timing is on point and he has a beautiful swing. I hope it whiffs a lot today. I have a complicated relationship with Bautista. That bat flip, wow. It was my favorite moment in recent memory of any post-season, baseball purists be damned. It’s not his fault he looks a lot like my arrogant d-bag uncle and sometimes acts like him too. Just take your strike three and sit down, pouty face.

The great thing is that when I get home tonight from my 4pm game, there will be more baseball to watch! There is a World Series rematch: the New York Mets are playing Kansas City at Kauffman Stadium. I grew up a Mets fan, so they get my NL Allegiance, although I wouldn’t care what two teams were playing. It’s baseball, right? Who is complaining? You are? GTFO then. I ain’t trying to hear that. It’s Harvey at Volquez! That game is on at 8:37 ET on ESPN. Harvey should be fully recovered from his urinary issues–I have been texting him every hour on the hour to remind him to go pee. “Did you remember to wee?” “It’s time to go pee-pee potty!” I expect the restraining order to arrive any day now.

Where are my manners? Oh my goodness. I neglected to mention that the Team that Does Things The Right Way also has a game today at 1pm. I will miss some of this game sadly–I mean that sincerely. I don’t want to miss any baseball and it promises to be a great pitching match-up. The thing is I want to head over to the Trop early. Traffic will be heavy. Ferg’s across the street is going to be really happening today–there’s going to be live music and so on. Also, I want to head over early to watch Arch warm-up. My pre-game ritual involves watching pitchers warming up. I’ll try to watch some of the Cards-Bucs on my MLB.TV app on my phone, although I don’t know if it will let me since the game is on ESPN. I’ll stream the radio feed on my smartphone (@paper lions :-P). I’ll have to remember to bring my headphones.

Anyhow, this should be a really good match-up too. The St. Louis Cardinals are facing off with their rivals, the Pittsburgh Pirates. Last year, the Pirates won 98 games and yet, that still wasn’t enough. The Cubs are getting a lot of love in the NL Central and rightfully so, but don’t sleep on this team. Nobody talks about them. The Pirates are basically the same team as last year, and they are dangerous and hungry. Wainwright gets the ball for the Red Birds while Liriano toes the rubber for the Bucs. Yeah, I really, really need to watch this game. Ferg’s has televisions, and the Trop broadcasts games too in one of their bars. I’ll figure out a way.

The only thing that could make today better for me is if y’all were joining me. I think we would have a great time and I could show off St. Petersburg, a surprisingly cool little city. Anyhow, enjoy the best day of the year, Opening Day. How are you planning to enjoy the games today?

12 thoughts on “The Most Wonderful Day of the Year”