Today I visited the Spring Training home of the Toronto Blue Jays.

It was a mercifully overcast windy day today at the awkwardly named Florida Auto Exchange Stadium. It is the only thing awkward about this stadium. I say it is a mercifully overcast day because these poor pasty Canadians cannot withstand sun. If you’re expecting an objective, unbiased report, move along. You have come to the wrong place. I unabashedly love Dunedin and this stadium.

Dunedin is a town of 37,000 with a Scottish heritage in the northwest section of Pinellas County known for being very artsy and gay friendly. It is littered with old bungalows, small shacks, and cool bars like the Chic-a-Boom Room. While a lot of Florida is as sterile and artificial as Edward Scissorhand’s neighborhood (filmed not too far in Lutz, FL) with its cookie cutter homes, there is an authenticity and naturalness to Dunedin with its large oaks and Spanish moss. It has laugh lines; it’s dirty and pretty. It also has the lovely Caladesi Beach, selected as one of the best beaches in the country. It is only reachable by boat, or for the more adventurous among us, kayak. This is no tourist trap. There are no shops here. There are usually few people here during the week. You are likelier to come across a rattlesnake. You own this island. The first time I saw a dolphin not in captivity was here. I could die very happily here.

But, back to baseball. Dunedin also loves its Blue Jays. 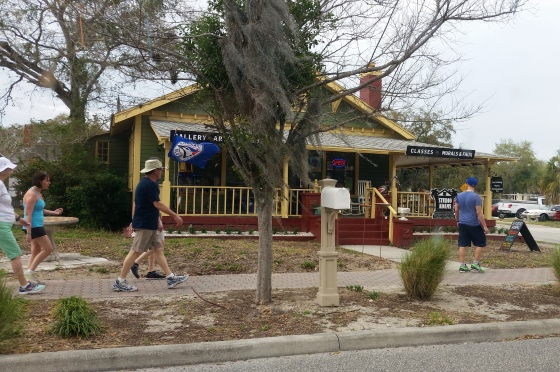 An art gallery/coffee shop down the street from the stadium.

Sadly, Florida Auto Exchange Stadium won’t be here long. It is old, and it lacks the modern amenities and conveniences that teams have become accustomed to. The Jays’ practice facility is two miles away. Understandably, the Jays want a newer facility. Dunedin is working to get the Jays a newer facility to not lose that sweet, sweet Canadian tourism dollar.

Netting over the dugout to protect fans.

One of the things I like about it is that is one of those stadiums that is part of the neighborhood. People live right across the street from it. There is no berm here. There is no jumbotron. This is as low frills as it gets. If you park close to the stadium, your car is likely to get hit by a foul ball. It’s that kind of ballpark. It’s a dinosaur, a relic.

I was talking to some people sitting next to me during the game. One of them suggested knocking down the library next door to expand the Jays’ facility. “What do people need a library for anyway? Everyone reads on their Kindles now!” she said. I smiled. Poor, needy people, don’t you worry. You’ll be fine. I think that’s what Maria-Thérèse said: “Let them read Kindles!” I liked the woman anyway though. She’s a bartender at Frenchy’s at Brighthouse Field, and she told me she would hook me up next time I was there. The Rays are going to be there on St. Patty’s Day, and I fully intend to celebrate my Irish heritage. Perhaps I’ll live blog that game.

Anyhow, I arrived early, as I like to do to catch warm-ups and batting practice.

“Next time, I’m flipping the bat that high.”

The Rays were split squad today, and they brought with them huge stars like James Loney and Brandon Guyer. Really, that’s it. MLB should slap them on the wrist for the crap line-up they brought with them today. It didn’t bother me, but I heard some pretty disappointed Rays fans that those were the two biggest names in their line-up. The SP pitcher was Taylor Guerrieri, who is their #2 prospect, but also has not seen higher than Adv(A). Matt Andriese was the original starter, but was a late scratch due to tightness in his abs. You’ll be shocked to know the Rays lost to the Blue Jays today 6-1. Bautista tee’d off for his first homer of the spring, and I am not sure the ball landed yet. It was a 3 run bomb to left field. 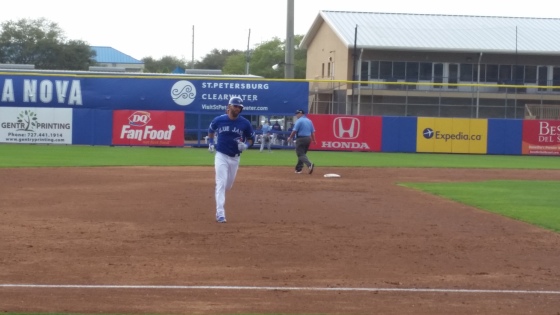 I was happy that the Rays didn’t make an error today. Remember how I said Bahstahn had wicked problahms with defense? Yeah, well, so does the Rays middle infield. The Rays don’t have the offense to make up for defense issues and their defense as it stands will hurt their pitchers. On the Jays side, 23 year old RHP Aaron Sanchez looked good, pitching four strong innings while walking one and striking out four, but he was facing a pretty substandard line-up. Split squad road team blows. He is battling though for a fifth spot in the rotation, and today’s effort certainly didn’t hurt his case.

In any event, it was fun to see the Blue Jays take batting practice. They sure can hit. Josh Donaldson is fun to watch too. My seats were four rows back from third base and the boy has some swag. He’d bounce along to the music, which was all sorts of adorable. 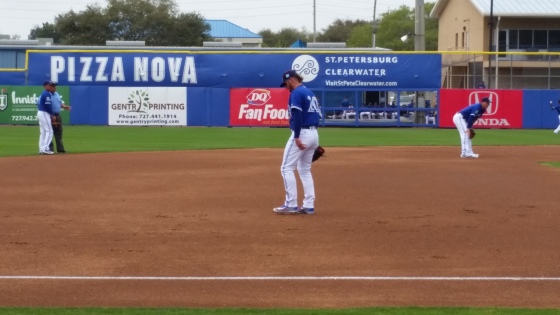 Other silly notes. The Blue Jays have the most homer crowd I have seen of any Spring Training crowd I have seen so far, prone to spontaneous chanting of “Let’s Go Blue Jays” during the game. That’s a lot of cheering and energy for Spring Training. Games tend to be way more laid back than that. I mean, go ahead knock yourselves out. By all means, cheer for your boys. I’m just saying, it’s a long season and it hasn’t even started yet, and this game doesn’t count so you might want to pace yourselves. I guess they were pretty excited to see their boys. Then again, I guess if I froze my ass off in Canada all winter, I would be really, really excited to be here too.

This guy may have had something to do with it too: 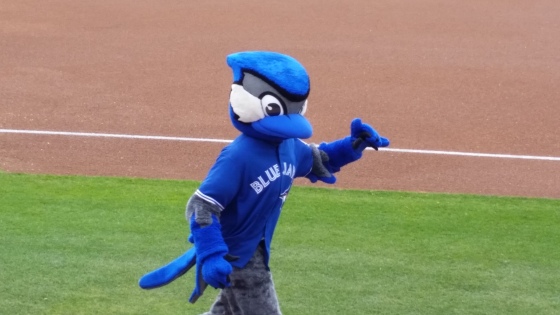