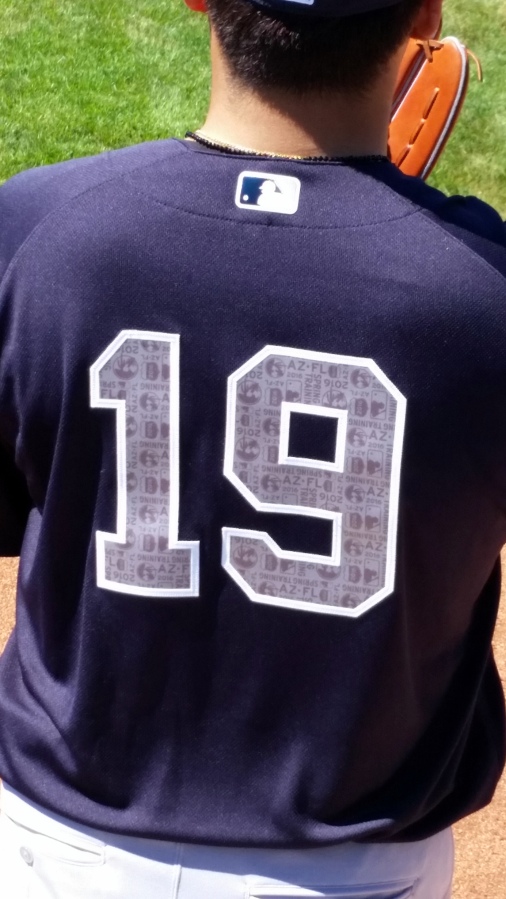 I thought I was done with my little Spring Training tour for now, but I woke up Sunday feeling malaise that it would be a day without baseball in person. Kevin S. to the rescue! He helpfully reminded me that the Yankees would be playing the Phillies but a stone’s throw from me at Brighthouse Field. Bah, the Yankees. He sweetened the pot by mentioning Tanaka would be the starting pitcher. Now, my interest was piqued. Since it doesn’t take much more convincing than “Do it!” for me to do something, I was sold. This game, however, would require family involvement–the children.

We arrived at Brighthouse Field early to see Tanaka warm up. I have been to Brighthouse Field more times than I can count. I have always thought it an attractive Spring Training and minor league facility, but now that I had the memory of Ed Smith Stadium, Ed Hammond, and JetBlue Park so fresh in my mind, I found it lacking somehow. Familiarity in this case has bred contempt, although I know objectively, there is nothing wrong with it. I noticed its flaws–the power lines you can see in the distance–instead of its beauty, or maybe it was because it was jam packed with Yankees and Phillies fans. No, seriously, the moment I saw it from the distance, it was like an old annoying boyfriend. I wanted the shiny new exciting stadium I met last night that seemed flawless with its perfect sunset. I know I was being unfair.

The exterior is similar to Ed Smith’s–Spanish Mediterranean stucco with tile roofs and arched entrances. Outside the main entrance is a fountain with a statue of Steve Carlton. (Picture taking had a degree of difficult today of 10,000 because I had to play mommy–if it’s not my picture, I’ll credit the source.) 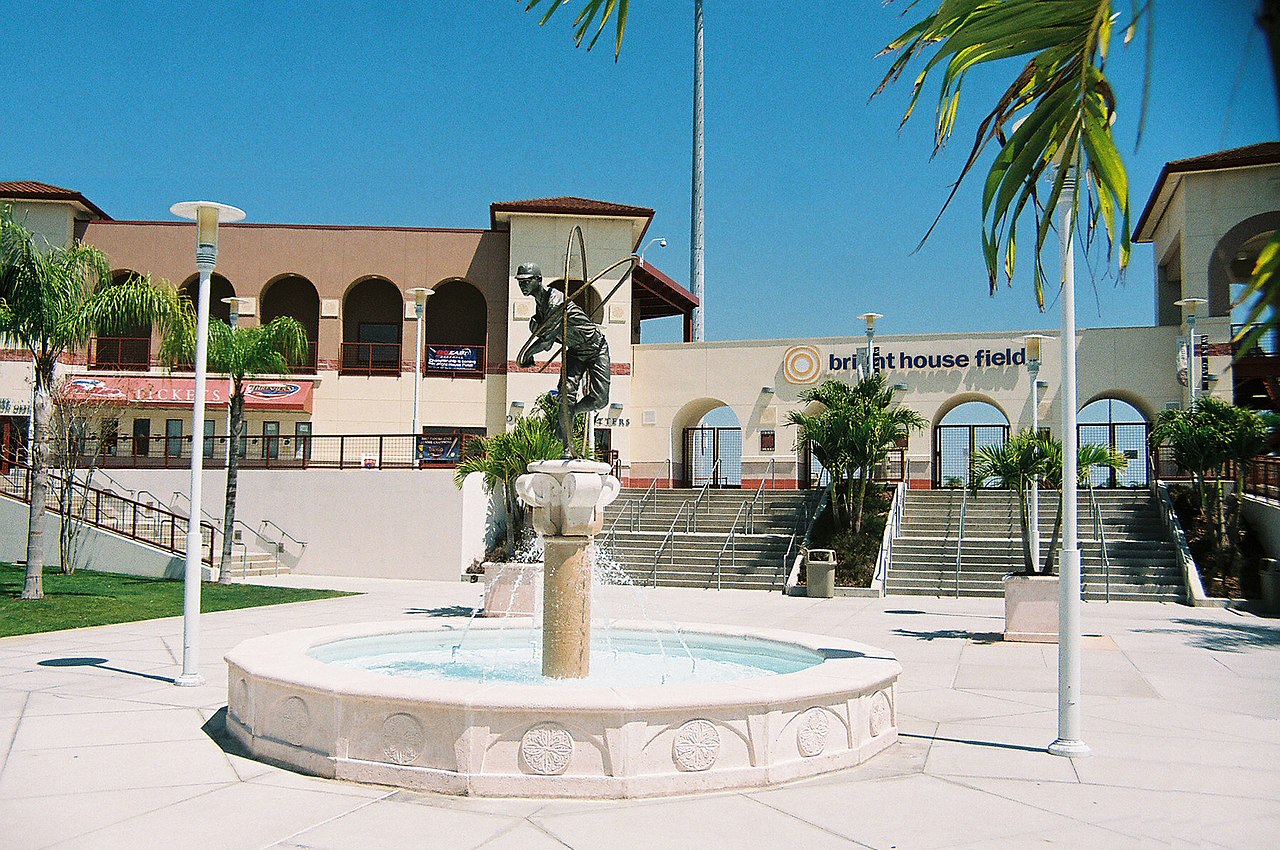 There is definitely a party vibe at Brighthouse Field. The thatched roofed tiki bar in left field run by Frenchy’s, a popular local bar/restaurant chain helps to nourish that feel. A lot of people get SRO tickets and just hang out there for the whole game. You can get your foofoo drinks here. It’s very crowded to navigate and the air is rich with cigarette smoke. Now, I don’t mind the smell of pot–it’s like incense–but cigarette smoke irritates the hell out of me. I avoid this area.

There is a playground area, much to my chagrin, where you can’t even watch the game. If the kids want to go play, the parents can’t see any of the game. A nice amenity would be a television in that area. Yes, I suppose they want you to watch your kids, but I am at a baseball game. I suppose I am here because I want to watch the game. Guess where I spent a couple of innings?

You might be aware that Hooters girls are the ball girls at Brighthouse Field. Clearwater is the home of the original Hooters, so naturally, the Phillies want to honor this historical landmark. If you are ever visiting locally and you must have boobs with your wings, I would recommend Wing House over Hooters. The wings are much, much better, and the girls are just as pretty (actually they are dressed in black shorts and tops, which is much more flattering than that ugly orange). Or, just hire a hooker and eat wings with her. Why get sexually frustrated? Have your wings and eat them too. Wow, I have really gone on a tangent here. Back to baseball.

The vibe was definitely not as laid back as it had been for the past three spring training games. I heard a Yankees fan yell, “Phillies suck!” One, yes, we know. Thanks, Captain Obvious. Two, no one yells that at a Spring Training game. No one heckles. (Unless it is Jim Norton heckling Alex Rodriguez at a Spring Training game and posting it live on Twitter. Did anyone else see that last year? It was hilarious.)

Watching Tanaka warm-up, Yankees fans were harassing him for an autograph. I have been to a lot of Spring Training games. I have been to a lot of games at Tropicana Field. I have never seen anyone harass a starting pitcher while he is warming up. I said to one fan, “He’s working; he can’t sign your autograph right now.” Don’t you want your pitcher properly warmed up and focused? Would you want him thinking about anything else? I know this is just Spring Training, but this is prep work for the season. There’s etiquette. My god, New Yorkers can be so annoying. I’m a New Yorker. Thanks for reminding me why I left. They were making Phillies fans look so good.

I picked a great spot in the berm that was nicely positioned next to the bullpen. The field has a strange set up for the bullpen–the two teams are parallel to each other so there are no secrets here. I got great shots of Tanaka. I could practically whisper sweet nothings in his ear, but I didn’t, because I have manners. And I don’t speak Japanese.

Tanaka looked freaking awesome. That’s my scouting report. His control is a fucking dream. Catcher said here. Here it went. There. There it went. Amazing pinpoint control. Could probably thread a needle with a baseball. All 10,000 of his pitches looked like they were working to me.

It wasn’t all bad Yankees fan though. On the berm, I was sitting next to this dad and his two young daughters, age 9 and 6, who hit it off with my kids, age 7 and 4. This dad is a Yankees fan, but somehow was still nice. His wife was at home with their two year daughter, and they were expecting their fourth daughter. “Kept trying for that boy?” I asked. “Yep.” he replied. “Gonna keep trying?” I asked. “Nope.” he laughed.

#41 started warming up in their bullpen. I asked pregnant dad if he knew he who he was. “Nope.” Since the Yankees still insist on no names on the back of their uniforms because it is 1957 and free agency doesn’t exist and players never shuffle around, I had to look him up. The reason I was curious is because a big burly Yankees fan had saddled up to the bullpen and yelled, “You know who else wore #41? Tom Seavah! (sic).” I want you to hear his accent. “You gonna be just like you him. You got great stuff! Look at you, hitting your spots! Whatta fastball! Tom Seavah! Don’t you forget!” If my eyes rolled any harder, they would have popped out of their sockets. You heard it hear first. Non-roster invitee Anthony Swarzak is the next Tom Seaver according to big burly Yankees fan. Pick him up for your dynasty leagues.

(Forgive all the typos. Feel free to edit them, fellow bloggers. I gotta go to work.)