Always a source of great amusement is the assclowns who decide to make their Hall of Fame ballots public.   I’ve always loved the hypocrisy of it all.  Moron is given a vote to the Hall of Fame, then makes moronic ballot, then gets on their soapbox and writes an article “defending” their moronic ballot, in a shameless cycle of self promotion all the while shitting on others usually with no ground to stand on.  We usually get four or five of these a year, and I’ve long since stopped caring about the Hall of Fame for precisely this reason.  It’s utterly predictable and rather embarrassing that any self respecting organization would allow these jack-wagons to profit off “statement” ballots consisting of their own ignorance.  I mean shit, most of these jackasses not only don’t take their responsibility seriously, but they actually provide us with written evidence as to why they should have their voting privileges repealed.

Today we have my favorite of such ballots, this one by award winner Dan Shaughnessy.  Asshat to lead all asshats. 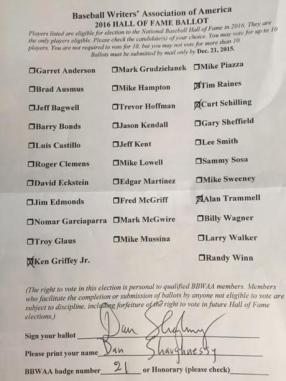 Dumbass Dan votes for Griffey Jr., Tim Raines, Curt Schilling, and Alan Trammell.  And that’s fucking it.  In what’s probably the most stuffed ballot of all time Dan could only muster the vote for 4 of the total 10 votes he was allotted.

Dan gives his “solid” reasoning below.

The next best new name of this year’s ballot is Trevor Hoffman. Sorry, no soup for him or his one million saves. Loved his brother Glenn, a Sox infielder, and his dad, a singing usher at the Big A, but I believe saves are overrated, especially in the era in which Hoffman pitched. Give me Fingers and Gossage, but not the estimable Hoffman.

Saves are overrated.  But his brother who was a Red Sox, yea I’d vote for him.  Fuck that guy who’s the second best closer of all time.  I can’t wait for Schaughnessy to tell Mariano Rivera to go fuck himself because saves are for losers.  Go get a cup of coffee because you won’t be getting Dan’s vote.

This is the Hall of Fame. Not the Hall of Very Good. It’s OK to hold out for the best of the best. I will never be one of those voters who wishes I could vote for 20 guys. The 10-vote limit is more than enough, even when you attempt to stand by guys you voted for in the past who have not made the cut.

This is why you should be fired.  Even leaving steroid guys out, there are a shitload of best of the best on this ballot.  Get the fuck out.

Schilling got only 39.2 percent of the vote last year, which is unfortunate. Sure, his win total (216) is low for a Hall of Fame starter and he was mediocre in his early years. He’s also a blowhard, but that matters not. Schilling’s postseason numbers (11-2) are off the charts and he was one of the great strike machines of the 20th century.

So you admit that Schilling is a borderline candidate, but you are from Boston and they would kill you if you didn’t vote for him because he got a little blood on his sock that one time.

My Trammell pick is a little sentimental. He got only 25.1 percent last year. He hit .300 seven times, won four Gold Gloves, and should have been MVP in 1987 (George Bell won). Consider it a PED backlash vote.

Look, I like Alan Trammell.  But seriously?  You are admitting you are voting for him only because you don’t like guys who maybe took drugs that maybe or maybe not helped them a little possibly?  Go fuck yourself.

I’m still holding the line on guys who cheated and guys who look as if they were dirty. This disqualifies all the best names (other than Griffey) on the ballot. It takes out Barry Bonds, Roger Clemens, Sammy Sosa, Mark McGwire, Gary Sheffield, Mike Piazza, and Jeff Bagwell. Some of them were obvious cheaters, some we merely suspect, which is, of course, wildly unfair. Every voter has his or her own system/conscience.

Some are merely suspect.  If they float they were a witch am I right?

I think Piazza is a lock this year. He is, after all, the greatest hitting catcher in baseball history.

But I’m not going to vote for him, because reasons.

For the record, I’m not withholding on Edgar Martinez because he was a DH. I just never thought of Edgar as a dominant slugger in his era.

Mike Mussina is another tough omission. Moose won 270 games, but he always pitched for good teams, and when it comes to the big games we’d all take Schilling or El Tiante every time.

While you’re at it, take a good look at Fred McGriff and try to figure why he doesn’t get more love from the voters.

Including Shaughnessy, because he had 6 unused votes and didn’t vote for him.

For interesting comparisons sake, let’s take a look at how the rest of the Boston Globe voted. (There’s an error in the image as Shaughnessy voted for Trammel, not Billy Wagner, but the Globe has yet to notice/correct this error.) 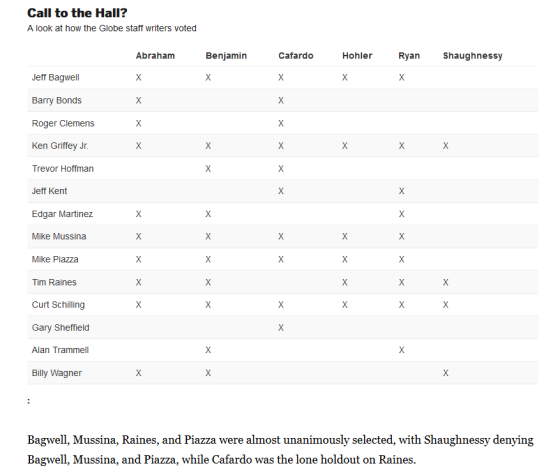