“For you, never a kvickie. Alvays, a longie.”
– Dracula, in Love at First Bite

A couple of weeks ago MLB announced that it was exploring the possibility of having two teams play a furreal game at London’s Olympic Stadium, returning baseball to suckle the dugs of the Mother Country and explore its real roots (Fort Sumter and Cooperstown had a great run but reality impends). Before I embark on my peroration of the weekend, though, I would like to suggest that whichever teams are ultimately selected, they be urged to attend a league cricket match. I’d send them either to the ancient Oval pitch in Vauxhall (which boasts surely the most splendid spectator’s pavilion in the sport):

or at the venerable Lord’s Cricket Ground, which is veddy Brrritish (sniff):

I have to confess to a certain fondness for Lords. I saw my first cricket game there (a test match), and my late father in law, veddy Brrritish hisself, was on its advisory board. He got us the banquet hall there for our wedding reception, where the only Gorilla-Gram ever sent to an affair at Lords somehow got past security to deliver us a congratulatory telegram from one of my bride’s relations in forsaken Willesden. (A couple of years later, we evened the score by sending the dispatcher of that epistle a Chicken-Gram, equitably the only one the Rabbi of the big Sephardic temple in London could recall barging into a wedding at his temple.) Yes, I’ve suckled the dugs myself and do not dispense my advice lightly.

Better still, the cricket leagues recently introduced T20 games, limited to 20 overs, which usually get played in three hours or less (as opposed to a test match, which sometimes overlaps multiple geological epochs). Ergo, even Yasiel Puig wouldn’t be likely to doze orf and miss his bus back to Olympic.

In any event, I plan to accomplish three things with the forthcoming series of posts: (a) to explain cricket to baseball chauvanists – a task whose difficulty I assure you that I do not underestimate in order to (b) discuss one of the greatest books on sports, and surely the greatest book on cricket, ever written: C. L. R. James’ Beyond a Boundary: 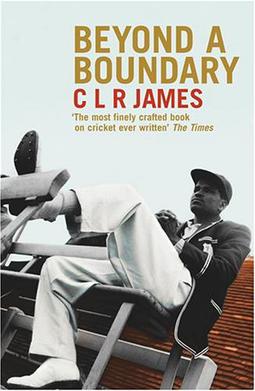 and finally (c) to compare his achievement to the baseball writings of The Bart – A. Bartlett Giamatti – himself.

To begin: cricket is like baseball in many ways, as one would expect from the game out of which baseball primordially arose – a case of ontogeny recapitulating phylogeny, if you will (or even if you won’t; there it is, mate). It is also as different as color from colour, or as a trunk from a boot. Cricket in an early form was being played by children in Kent, southeast of London, in the 15th century, and grownups – you know, like us, but with funny accents – began playing it around Shakespeare’s time. It has evolved hugely over that period, but the modern game you see today has much the same shape to it as the one played in 1844 in the first international test match. The game has its equivalents to Babe Ruth (W.G. Grace) and Jackie Robinson (Leire Constantine) and Ted Williams (Sir Don Bradman), and you can draw analogies till the heifers hoof homeward.

What follows is a gross oversimplification of a richly complex game, since I expect there must be some designatedhitterball fans out there for whom richness and complexity are as alien in concept as a methane atmosphere (with the exception of, say, the interior of a Volkswagen holding five people with the A/C on “recirculate” on the way home from an extra inning game at which a lot of beer and hot dogs with sauerkraut were consumed).

Watching cricket is, for a baseball fan otherwise uninitiated to the mother game, a lot like someone who likes top forty three minute songs listening to the entire side of a live John Coltrane album for the first time. You’re accustomed to the short, repetitive periodicities of baseball that give the game its shape. This is truer of real baseball than designatedhitterball to be sure, but even American League games are bounded by their usual six-out, nine inning patterns. This is preeminently not the case with cricket. It is patterned by its six-delivery overs and ten-out innings (and “innings” in cricket is used as both singular and plural; one innings, ten innings, etc.) but those innings can go on for half a day if good batsmen are facing mediocre bowlers, and literally hundreds of runs can be scored in an innings. Cricket has its definitive shapes and geometries just like baseball but their perimeters are vaster and the time scheme over which they play out much longer (except in innings-limited league games, as mentioned above).

Like baseball, cricket has batters (called strikers or batsmen) and “pitchers” (called bowlers), umpires (who as in baseball stand behind the “catcher,” called the wicket keeper, who himself plays behind the wicket, or bowler’s target). The wicket consists of two sets of three vertical stumps, each set topped with bails, set 22 yards apart across the ten foot wide pitch. The pitch is a stretch of usually level ground – not necessarily too level or smooth, but when not, often “matted” with a woven coconut fiber mat. Oftentimes the entire pitch may be referred to as a wicket, too. This may sound confusing but context generally clarifies whether we’re talking about the stump-and-bail set or the entire pitch). The stumps of the wicket each have a name: leg stump (the side of the batsman’s legs), middle stump and orf-stump (the side of the batsman’s bat, or, opposite his legs). These designations change sides depending on whether the batsman is a lefty or righty. The wicket ends of the pitch are bisected by two perpendicular lines each known as the batting or popping creases and bowling creases, to whit:

The pitch is set in the center of the cricket ground, usually shaped like a large oval:

The batsman’s first obligation is to guard the wicket from the bowler, and next, to hit the ball away from it and score runs. Here’s where cricket becomes really different from baseball: there’s no “foul territory,” and the ten fielders in addition to the bowler have to play all around the batsman. Skilled batsmen can play a ball behind themselves, over their own heads, to the left or right, or “drive” the ball over the heads or between the fielders all the way to the boundary. A ball driven on the fly beyond a boundary is worth six runs; a ball driven on the ground to the boundary is worth four. When you read cricket scores, you’ll see the batsman’s total runs, thence broken down into shorter scores plus his “fours” and “sixes.” The highest individual score in a test match belongs to Brian Lara of the West Indies team in 2004, when he scored – are you ready for this? – 400 runs.

The other way to score is incumbent on the batsmen, much as it is in baseball. When the ball is struck, the batsmen – the one batting, or striker, stationed at one end of the pitch and the other stationed at the other end – run back and forth the length of the pitch, pausing to touch their bats to the wicket. Each of these “runs” is worth a score. However, the batsmen have to be sure to return to their original stations before the fielder returns the ball to the wicket keeper or they will be called out.

There are many more fielding positions in cricket than in baseball, more than there are fielders allowed, and the defending team captain – usually the bowler – has to position his fielders according to the sort of ball he wants to bowl and the known propensities of the batsman he is facing. The fielding positions have great names. Here are some:

Pity the poor fielder. Only the wicket keeper, who crouches behind the wicket and in front of the umpire, can wear gloves. Everyone else needs a good, weathered pair of hands. Then, he has to get the ball back to the wicket to stop the batsman from “running” between the wickets, scoring runs. If fielder catches the ball on the fly, or if the wicket keeper receives the ball from the fielder and knocks the bails orf the wicket with it while the striker is still running, and not safely inside his crease, the batsman is “out.” Watching a test match, which is an international match between national or regional teams (ie England versus West Indies), you get to see the fielders running madly after the ball and only rarely does it ever give them time to get in front of it. Even so, there have been some great fielders, but we’ll get to that when we get to James’ book.

Well, I warned you it was complicated, didn’t I?

Bowling is as much of an art in cricket as in baseball, and there are myriads of bowling styles (fast bowler, slow bowler, leg bowler, and multiple variations on each). There are also many types of bowled balls, also with great names: inswinger, outswinger, googly, Yorker, and on and on. Many of these names are based on the distance of the bounce from the striker:

The bowler runs up from the orfside behind the popping crease opposite the stance of the batsman and throws the ball from the vicinity of the crease, usually at the wicket but not necessarily, such that it bounces somewhere before the batsman. I won’t go into what makes a cricket ball “legal” but suffice it to say that the game has its ball, strike and foul equivalent. The bowler’s first objective is to get the ball by the striker and knock the bails from orf the wicket, in which case the batsman is “out.” Our bowler puts intense spins of various directions on the ball, aided by that fat seam, to induce the ball to do weird things when it bounces. Good batsmen can pick up the spin and predict the bounce – sometimes. Cricket bowling manuals are wonderful, being full of odd grips and odder names for the throws they engender.

And unlike in baseball, the same ball is used until the game ends or it is driven into the stands for a six. None of this prissy throwing it to the stands because of a little scuff we’re used to. Constantly pounded into the ground by the bowler, swatted by the batsman, driven over the grass, the ball becomes rougher and subtly misshapen as the game progresses. Good bowlers know how to take advantage of the roughened surfaces to achieve ever weirder and less predictable bounces. All legal and big evil fun to watch. Imagine if Gaylord Perry had been allowed to stick his bubblegum to his pitches.

One big difference between baseball and cricket is that if the batsman is struck on his leg pads while his foot is out front of the batting crease he is bowled out “leg before wicket” (lbw). Ergo, bowlers often try to snooker the batsman enough to hit him on the pads in this manner. In the inter-war years (ie 1918-1938) hitting the striker, often above the pads (the so-called “body-line,” roughly the equivalent of our “beanball”) had become so endemic that rules were passed to end the practice before someone got hurt.

Okay, I think we’ve covered the basics here. Next up, I’ll talk about James’ great book about the game, its history, and its social and political implications and influences.

10 thoughts on “On Baseball and Cricket: C L R James’ Beyond a Boundary and MLB’s Adventure in London, Part I”