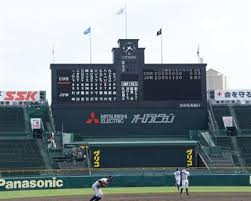 Back in the game 5 of the World Series, the U18 Team USA were introduced just before the game… I was kind of expecting HBT would make a story about them especially with the achievements they made in their previous tourney, but no article was made so I decided to make one myself even though it may be late.

Here’s the highlights of the game.

Koshien stadium, one of the oldest Baseball stadiums in Japan today. Where HS players at just around the age of 16-18 become legends, that will eventually carry out their story in years to come. The tourney may have ended at Sept 06. 2015, but even though that feels like quite a time, it still feels like yesterday… In a cold night, with the United States leading 2-1 in the bottom of the 9th, the final 3 batters– Kotaro Kiyomiya (played there in the US in the LLWS), Hirasawa and Rui Louis Okoye (A Japanese-Nigerian HS Baseball player that was just drafted by Rakuten in this 1st round) were retired straight, and the team failed to win the gold in their home turf or so called “sacred ground”.

The final moments of the game.

You can also call this as one of those “crushing of crushing defeats” in Japan’s sports history. But for me in my eyes, both teams are winners, especially on how far they made it. They say that in defeat you can learn something, you stand back up when you fall, and you strive yourself to improve even more.

(I think I may also try making an article about the status of our Baseball here in the Philippines 5 days before the start of our 2nd semestral… It’s going to be a busy week for me this coming days so I don’t know if I can post that many foreign Baseball news here but I’ll try my best. Also, thank you for granting me an opportunity to write an article in this site… It really means a lot.)

3 thoughts on “The day or day after it should’ve ended, this is a tourney deserving of story.”