Prior to setting the roster, the #Royals selected INF Raul Mondesi from NW Arkansas (AA), and designated RHP Joba Chamberlain for assignment 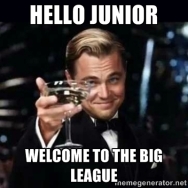 RMJ will be the first player ever to make a Major League debut in the World Series (he still has to get in a game first…sorta like the end of “Rudy”). As if that was not particularly shocking enough – this is a guy who not only has never played above Double A, he spent all of 2014 in Single A and had a .610 OPS. You could argue he should still be in A ball!