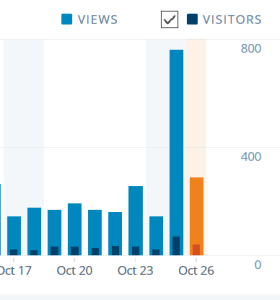 Wow, just wow.  When I started the site, I just hoped it to be a really chill place for us to all hang out and discuss whatever topics of the day there are around MLB.  I was not sure what to expect out of the site, would we flame out in a few weeks, or would we continue on for some time?  Honest confession here, I’ve found myself starting to really, truly caring about the growth and success of the site, and have found myself checking the stats on a regular basis.  Since we’ve started, we have steadily grown in popularity, but yesterday was far and away the most popular we have been yet.  I am both humbled by my own lack of posting and proud of the fantastic writers that we have on staff.  You should all be very proud of yourselves.  And I just wanted to take a quick moment to once again, thank you all for your very hard and dedicated work.  Thank you to all of our writers, thank you to all of our supporters, thank you to all who have gotten the word out, and thank you to all of our readers.  And here is to continuing the conversation!

66 thoughts on “Holy Crap! Yesterday Was A Busy Day!”