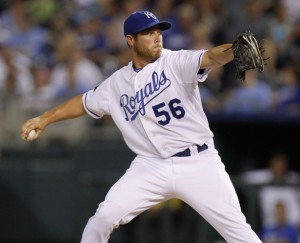 Kansas City was just dealt a significant blow as they were forced to shut down closer Greg Holland for the rest of the season, and may lose him for all of next year awell.

Greg Holland has a “significant” tear in his UCL, Ned Yost says. So Tommy John surgery is the most likely option.

Yost now believes Holland tore the ligament last August, meaning he pitched last September and the postseason as well as all of 2015 with a tear in the ligament. The Royals asked Holland to get his elbow checked out multiple times this season, McCullough adds, but he declined each time until last month.

Holland has a 32 Saves with 3.83 ERA over 44.2 innings this season, and Kansas City must now find a new closer.