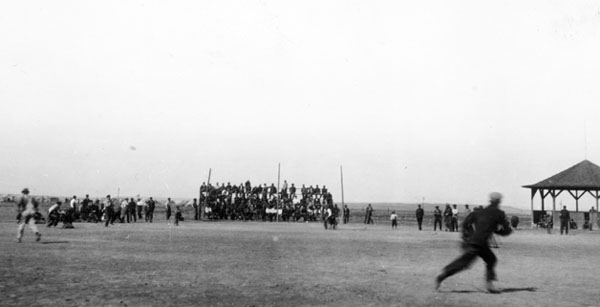 On September 23, 1913, the strike in the southern Colorado mine fields began. The strikers’ employer, Colorado Fuel and Iron Corporation

(John D. Rockefeller, Jr., majority owner), immediately evicted them from their homes when the strike was announced. Ironically, one of the strikers’ complaints was being forced to occupy company housing (and use CF&I stores and doctors). Now they were turned out into the cold sludgy day without notice — families with children and no other housing or employment options in the isolated mountains of Colorado.

The leadership of the United Mine Workers of America had expected the move; it was the same tactic mine owners had used against striking workers in West Virginia and other places. In preparation, the UMWA had rented land — fields adjacent to the canyon entrances in the area — and brought in tents for the workers as temporary residences. The tents were outfitted with cast iron stoves for families to use for heating and cooking. A dozen of these tent colonies sprang up overnight, as miners dragged their belongings up into the hills. The largest of these was the Ludlow colony (near the old town), with about a thousand residents consisting of miners, their wives, and children.

The strikers settled in for a lengthy fight. Each day they picketed the mines, and armed patrols assured that the company couldn’t bring in new workers to replace them. Most of the rest of their time was spent with the daily struggle of living in their difficult conditions and keeping their communities going. They were harassed — shot at with machine guns, charged by men on horseback, beaten up, and threatened — by company agents throughout. CF&I hired the Baldwin-Felts Detective Agency, experienced strikebreakers from back east, to intimidate the strikers and run them off, if possible.

In the midst of the threats to their survival and the regular exchanges of gunfire that came to be known as the Colorado Coal Field War, the strikers — many of whom were Greek immigrants but including people of twenty-one different nationalities — made one recreational activity a priority. At the Ludlow colony, they set up a baseball field. They even erected some bleachers for spectators to use to watch. They organized games, making the national pastime part of their precarious life, as they suffered through the cold winter in their canvas homes.

On April 19, 1914, the Greek strikers celebrated Easter. After services, they organized a game of baseball. Before they could finish it, however, agents with rifles rode in on horseback to break it up. The riders were outnumbered, and the strikers and their wives taunted them when they retreated, rebuffed. The armed men promised they’d return, and the next day, they did. They opened fire on the colony with machine guns and then torched the tents. Nineteen people were killed — the youngest, two and half years old. There wasn’t anymore baseball in Ludlow after that.